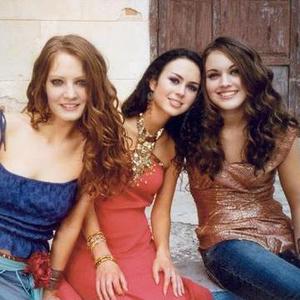 Bellefire is an Irish girl group, best known for their 2002 cover of the U2 song "All I Want is You". They originally consisted of Kelly Kilfeather (born 23 March 1979), Tara Lee (born 25 July 1982), Cathy Newell (born 14 July 1982) and Ciara Newell (born 7 July 1983). Currently, only Kilfeather and the Newells remain in the group (Tara is pursuing a career in fashion and television). They mostly perform pop and adult contemporary music.

Outside Southeast Asia and their native Ireland, they have received minimal recognition, although they did experience minor success in the United Kingdom with their singles.

They first formed in 1999, backstage at an audition for a boy-girl band in which Louis Walsh was a judge. According to the Irish Independent, Walsh was disappointed with the standard of male entrants and opted to sign a girl group instead. The intention was to aim towards a "a more mature niche in the pop market" than what was becoming the norm for vocal groups at the time.

After recording their debut album After the Rain, they released two singles, both of which were top 20 hits in the UK. The second of these "All I Want is You" received a lot of airplay and got them an appearance on Top of the Pops. However, just as the album and another single were due for release, their record company Virgin unexpectedly dropped them and the album was never released, except in Japan, due to a new boss at Virgin who decided to do away with artists that weren't instant money makers. A disillusioned Tara left to become a fashion student, while the other 3 girls continued without their top-harmonist and developed a new repertoire. They were signed by WEA in 2003 and moved their base to London. They subsequently recorded a new album entitled Spin the Wheel.

Their first single as a 3-piece was "Say Something Anyway", which peaked in the UK at #26, but spent only 3 weeks in the charts altogether. The planned follow-up single for the summer of 2004 "You Were Meant For Me" was shelved. Bellefire spent the summer of 2004 promoting their upcoming single and album release around the UK at various festivals, but due to the album and single being continaually pushed back, the summer promotion did little to boost their reputation and sales. After the failure of their next UK single, the title track "Spin the Wheel" in October 2004, Bellefire completed their tour of Southeast Asia and returned to Ireland. The UK release of the Spin the Wheel album and a third single was pushed back several times through 2004 and 2005 until the release was eventually cancelled.

Nothing is known about the current activities of Bellefire, although numerous articles concerning the members pursuing various solo projects have surfaced. Ciara has recently been credited as a backing vocalist for Blue member Lee Ryan's solo album, Cathy was a judge on the 2005 Irish television show "Star Stream Final," and Tara is currently working in the fashion industry with a possible return to music. It is believed by fans that the group is now over, and the girls aren't planning a return to the music business as Bellefire anytime soon.