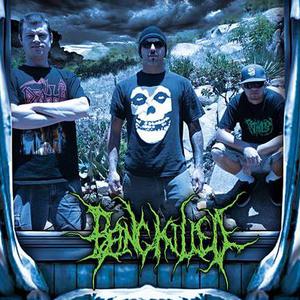 Being Killed is a brutal death metal / slam death metal band from San Diego, United States. They formed in 2007 by Dave Astor (Vocals, Bass, Drum Programming, The Locust, Pathology, Cattle Decapitation, Parasitic) and Tim Tiszczenko (Guitars, Pathology ) with Levi Fuselier (Vocals, Disgorge, Pathology, Sabbatic Feast) joining in later on. The band sound familiar to Dave's old bands such as Pathology but also adds in alot of influences from Abominable Putridity and Vulvectomy to give the band that edge in the slam death scene.

The band released their debut album called "Massacre of the Living" via Sevared Records in January, 2008 with only Dave and Tom in the band at that time. The band did , however, pick up Levi in late may and began working on new material. The band recorded and released their second full length "Kill Yourself" via Comatose Music in Septemeber, 2008. The band are currently working on new material again for a hopeful 2009 release.

Massacre of the Living