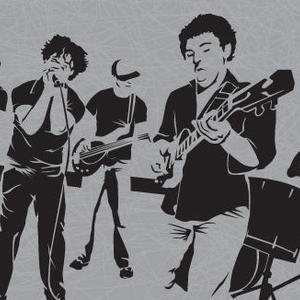 This band formed in 1999 in Mesa, AZ, when lead singer David Jensen and guitarist Hans Ringger started an acoustic project. Both had attended high school together and then did some traveling before hooking up again. Citing Fugazi and the DIY ethos as major influences, Before Braille slowly began composing songs, adding bass player Brandon Smith, drummer Kelly Reed and guitar virtuoso Rajiv Patel. In the years since 1999...

In March of 2002, the group released its debut four-song EP. The EP garnered press and college radio play for its emo sound. The band also shared the stage with Jimmy Eat World and The Used, among others. In the fall of 2002, Before Braille released its debut album, The Rumor, on Aezra Records. In the years since, they self released 2 EPs, Cattle Punching on a Jack Rabbitt and the Balance & Timing. They also released a UK version of Balance and Timing on the You and Whose Army label entitled Tired of Not Being Away Fromm Here that included additional songs intended for their next full length to be released in 2006.

That did not happend and, sadly, the band officially split in 2006.

On May 28th, 2006, the band's website posted the following explanation:

Many people have been asking, but we haven't known how to respond. Here is out attempt to explain the state of Before Braille....

There were concerns w/in the band for sometime that finally came to the forefront. Opinions and methods on how to deal with those concerns varied quite differently.

When we were unable to restore/maintain a working relationship, rather than end the band Dave volunteered to leave if the remaining members wanted to continue on. Ultimately, 3 of the 4 current members chose to take the name and look for a new singer and guitar player. (not including Rajiv in any of this, for he has been in Peru for 18 months)

Unfortunately, the agreement that was made prior to Dave's exit is not working out. So, the band now consists of Dave who choses to allow it to remain in the state of "indefinite hiatus." (To steal a term from ATDI.)
---

Dave just moved to Phoenix and has been fooling around on a laptop calling it Art For Starters, Rajiv is a missionary in Peru till Nov/Dec doing the good work, it's been said that Hans currently lives with his mom in UT, and Doug-Brandon-Kelly are hanging out in Mesa living together and/or w/ parents. What comes from all of this...who knows? Hopefully productivity for all.

Wish us all luck and we'll do the same for you. You can still reach us all via email at [the person's name] @beforebraille.com or all of us at band@beforebraille.com. Thanks for all anyone has ever done for us. There has been a lot of kindness shown and we are very grateful.

Thanks to everyone for buying our records, going to shows, letting us sleep on their floors (or wherever else), eat their food, set up and promoted shows, etc. There were oft times that we really felt blessed.
Thank you always.

Cattle Punching On A Jack Rabbit