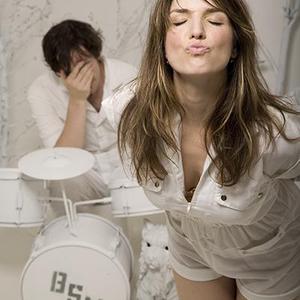 Bree Sharp & Don DiLego forged a successful writing partnership over 10 years ago during the making of Bree's debut album, A Cheap and Evil Girl (Trauma), which featured the wryly-scripted, cult hit ?David Duchovny (Why Won't You Love Me)?, and Don's critically praised, The Lonestar Hitchhiker (Universal). After completing work on what would have been Bree's fourth?solo release, the duo decided instead to scrap what was mostly a straight-forward acoustic album for a sound that incorporated whatever else was lying around the studio.

Experimenting with an audio collage that had no restrictions, hi-fidelity not being the goal, what grew was a sci-fi based, fantasy, retro-twang-rock, pop-folk montage, perfectly highlighted on their debut EP, Robots in Love. Featuring the heart breaking and biting lyrics that Bree has become acclaimed for, and Don's increasingly unique production and songwriting antics...for which he has been in great demand of late (see Jesse Malin's Love it to Life).

Early Releases | Each song on the ?Robot in Love? EP seem to twist and turn at every angle, like the title track itself, which starts out like a 70's disco song filtered though AM radio only to erupt in twangy divergent guitars and live drums. On their second EP release,? ?Simple Joys (4 Roy & Pris)?, Duran Duran's Simon Le Bon, a fan of the band, lent his haunting vocals on the titular, dark, love song written for the ill-fated androids in Bladerunner. The song musically and lyrically tells the story of the two genetically engineered slaves, star-crossed and desperate for more time.?

And Then There Was Banjo | Prior to completing their long-overdue follow-up EP (which as of this writing is actually complete), BSM released a heavily lauded and critically praised, banjo-laden cover of MIA's ?Paper Planes?, which has garnered it's own organic ground-swell and viral reach, gracing the cover of dozens of music blogs for it's own distinct take on the original. It has also significantly helped many new fans to discover the New York City based twang-folk duo.

Hello World | Despite having yet to release a full-length album, BSM has scored several big licenses on ABC's Castle, 90210 and The Hills, as well as promo campaigns for Victoria's Secret, MasterCard, and Starz. They look to return to the road soon with their new release. Don has also recently scored the feature film ?Ranchero,? whose soundtrack has been officially released. He also has a new full-length album due called ?Magnificent Ram A.? Bree has begun some early writing for a new upcoming and highly-anticipated solo release.

The Robots In Love (EP)