Beaten Back To Pure 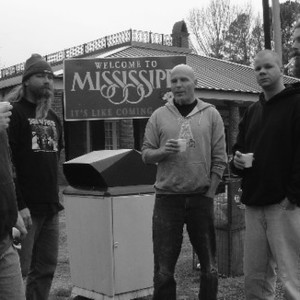 1998, amidst the sweltering heat and humidity of another intolerable Virginia summer, the foundation of the State's most prolific southern-tinged metal band was being laid. Encouraged by the 3-B's (Beer, Bongs and Boredom) Ben Hogg and Vince Burke began harvesting the fruits of what was to become the mighty Beaten Back To Pure. The lineup would change over the next couple of years, even losing the entire rhythm section, but by the time their 2000 demo (Double Barrel Blasphemy) was recorded and available as a limited release, the band had solidified.

The group consisted of Ben Hogg (Vocals), Vince Burke (Guitar), Eric Sundt (Guitar), Tim "Slam" Jacobs (Bass) and Chuck Ember (Drums). Later that same year, the guys would find themselves recording their first "official" release with Steve Austin (Today Is The Day, Lamb Of God, Converge) that would later be entitled Southern Apocalypse. Retribute Records in the UK would officially release the album in 2001. Amongst much hype and rightfully earned of course, Beaten Back To Pure toured incessantly developing a name for themselves as one of the most intense live bands to dare witness throughout the Southern and East Coasts. In the midst of all the hoopla, Beaten Back To Pure found some time to write, record and release their second LP, again on Retribute entitled The Last Refuge of the Sons of Bitches. However, prior to the recording, Eric had left the band only to be replaced by a local guitar "hero" by the name of Richie Scharr. A positive step indeed as he brought the band onto a new level of maturity and musicianship. The Last Refuge of the Sons of Bitches went on to receive critical acclaim as one of the highlights of the year, topping many critics favorite albums of the year and beyond.

Riding the wave of intoxicated endearment through their acclaimed album, Beaten Back To Pure burned through many a town, leaving a wake of destruction behind them. However, in that time, Beaten Back To Pure would end their relationship amicably with Retribute due to the physical distance between each other. Needing a new label they soon found a home at Long Beach based This Dark Reign Recordings (Devil Doll Records) in the summer of 2004.

With six years of madness and mayhem behind them, Beaten Back To Pure was back in the studio, their own in fact to begin laying the tracks for their most recent LP The Burning South. The album hits the streets officially in October 2004. And, judging by the pre-release press, The Burning South is proving once again that Beaten Back To Pure are a band to yearn for amongst the "Shopping Mall Metal" bands with their Hot Topic accessories of pink eyeliner and black wristbands. That about brings us up to speed!

The Last Refuge Of The Sons Of Bitches