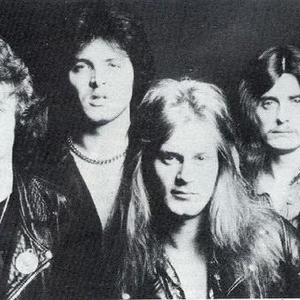 And so it was that from the ashes of the Warrior there was formed a mighty Battleaxe? So runs the ancient legend. Sometimes legends can be true. Sometimes legends can be modern. From the ashes of a band called Warrior there came Battleaxe. Back in the early 1980s in the north-east of England four young men joined forces to embark on a heroic quest ? to be one of the best heavy metal bands around.

From the ashes of a band called Warrior there came Battleaxe.

Back in the early 1980s in the north-east of England four young men joined forces to embark on a heroic quest ? to be one of the best heavy metal bands around.

In 1980 when Dave King (vocals) Brian Smith (bass), Steve Hardy (guitar) and Ian Thompson (drums) went into Durham's Guardian studios to record the single, Burn This Town, they wanted to be one of the best good-time rock bands. With a deal from Roadrunner Records, the resulting album sold well, bringing them to the attention of Kerrang who said ?these boys wield a mean blade which scythes through the small label production smog and scratches some genuine excitement into the grooves.?

Following the addition of Ian McCormack on drums, they built themselves up to be one of the regions most energetic and exciting heavy metal bands on the scene. Playing gigs across the country with bands like Saxon, Twisted Sister and Girlschool, recording sessions for Radio One's Tommy Vance, Battleaxe scored legions of fans with their second album, Power From The Universe.

With all their hard work appearing to pay off, the band suffered a severe body blow on the eve of a showcase gig for Atlantic Records when guitarist Steve Hardy unexpectedly quit.

Yet Battleaxe soldiered on. After a period with a floating line-up, In 1987 John Stormont and Mick Percy came in, adding a twin-attack approach to the guitar, making Battleaxe's sound more dynamic and exciting than ever before. Unfortunatley John Stormont left for domestic reasons and also Ian McCormack followed soon after. They were replaced with Jason Holt (guitar) and Stewart Curtan (drums). A large open air festival took place in Old Eldon Sq. Newcastle upon Tyne and the guys performed magnificantly but this was their only live performance with Battleaxe. This left the current line up (Mick Percy [guitar], Colin Simpson [guitar], Bri Smith [bass], Paul Atkinson [drums] and Dave King [vocals]) as powerful as Battleaxe ever was, finishing a fantastic performance at Klenal Hall, Bikers festival in Northumberland. And this is Battleaxe!

The recording of their third album was put on hold as they went in the studio to record demo material (now released as the Nightmare Zone ep). Arguably, their most commercial material to date, it shows that Battleaxe was undoubtedly capable of holding their own with the bigger bands on the scene.

Unable to secure a deal to release Metal Edge, the band drifted from public view, losing the momentum that they had built up over the years. With heavy hearts, the original founding members, Dave King and Brian Smith decided to call it a day. It had been one hell of ride. Lots of fun, lots of laughs, hard work and energy devoted to climbing their way to the first division of rock bands.

So here we are in 2010...just when you thought the name Battleaxe NWOBHM Band would never be descibed as a serious up to date metal act again...they are back...
Battleaxe are now recording their third album 'SHOCK AND AWE'....early reports have described this effort as the best of 80s metal with an 'in your face' up to date production...should be great.
The band have also played their European debut at Headbangers Open Air in Germany and are scheduled for a few more shows on 2010 including Hard Rock Hell UK.
Lineup: Dave King, Paul AT Kinson, Mick Percy and Brian Smith.

Power From The Universe