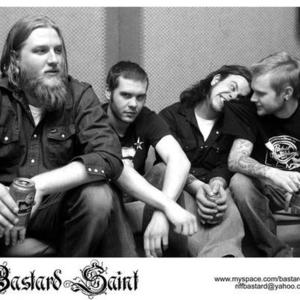 You know those guys that used to hang around outside your High School and sell drugs? Well, they started a band. It's called Bastard Saint and it's loud as hell. Formed after the demise of singer/rhythm guitarist Charlie Johnson's previous band, Martyr AD, Bastard Saint first started planting its seeds in the spring of 2006. Looking to start a band with an emphasis on mean riffs, bluesy vocals, and big beats, Johnson founded Homewrecker with some friends from the Minneapolis scene. After a few months of writing and recording, the band began unraveling.

Lack of motivation and too much focus on mind alteration had taken its toll. Enter guitarist Brent Hedtke. A veteran of the Minneapolis music scene, having done time in A Life Without and the hilarious Metallagher as well as numerous other projects, Brent took Charlie aside one night and suggested the two collaborate. Armed with a stand-alone ability with his guitar and the savvy to employ it, Hedtke was exactly what Charlie needed to keep his vision on track. Capping the line-up were drummer, Dan Johnson and bassist/tattoo artist, Zack Kinsey. This new band needed a name to go with the new blood?Bastard Saint. It didn't take long for these guys to find their pocket and soon they recorded their first demos with visionary engineer, Adam Tucker. Bastard Saint played it's first show on Thanksgiving night 2006 opening for The Atomic Bitchwax in front of a sold out crowd. The response was undeniable. Bastard Saint was the real deal. It was at this show that the band caught the attention of veteran drummer, Brent ?Van? Hanson (House Of Large Sizes, Ponofo) who proclaimed,? That's the band I was born to play with.?, and offered his talents to Johnson should he ever find himself in need of them. A short while down the road Bastard Saint did in fact find itself in need of those very talents and the call was made. Hanson was a sure fit and the band rolled on, stronger than ever. In the early months of 2008 bassist Zack Kinsey begrudgingly set down his bass in order to focus on the demands of a successful tattooing career and the band found itself with void to fill. Word got around and many names were tossed around but one name floated right to the top, Steve Post. Steve Post IS hard rock/ metal bass. Period. It took about 45 seconds of Steve's playing with the band in their studio before it was written in stone. THIS IS BASTARD SAINT. FUCK OFF! With a sound falling between COC, Thin Lizzy and Crowbar and a force to melt 1000 crotches into butter, Bastard Saint has carved out their own unique niche in a somewhat cluttered genre. Their diversity has seen them share the stage with such bands as The Melvins, Helmet, Burning Brides, Zebulon Pike, Dillenger Four, The Arrivals, Skeleton Witch, Weedeater and Black Cobra, as well as a slot during the 2007 SXSW festival in Austin TX. With the line-up set and a new EP ready for release, Bastard Saint is poised and ready to make an impression on anyone or anything that's in front of them. So unbuckle you belts, tilt your head back with an open mouth and closed eyes?take it.