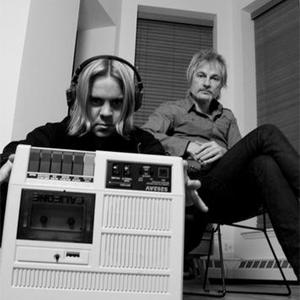 == Baskervilles (The Band) == Christoph Gerozissis, Rob Keith, Stephanie Finucane and Craig Van Orsdale formed Baskervilles in New York City in 1997. The members played together for years in trashy punk and garage rock bands (one called the Baskervils started in 1993 in Tampa). Bored with loud rock and inspired by the Television Personalities, the Clientele, the Kinks, Love, the Left Banke and French Pop played by DJ Franco at the Vampyros Lesbos party in New York City, Baskervilles turned the amplifiers down to perform high energy keyboard driven pop at low volumes.

The lyrics were designed to be simple narratives and open ended romantic stories, many pertaining to New York City.

From 1997 to 2002, Baskervilles performed a handful of well received shows at the Mercury Lounge in the East Village. During that time, Baskervilles recorded 2 sessions at Mitch Easter's (Let's Active, R.E.M.) Fidelitorium studio in North Carolina and 1 session at Dubway Studios in New York City. The group made one trip outside of New York City in the summer of 2002 to perform at a museum opening at the Migros Museum in Zurich, Switzerland featuring the artwork of Yayoi Kusama and Michel Auder.

The band took a 2 year break while Stephanie had a baby. Rob Keith and Christoph Gerozissis formed a nocturnal electro group called Autoparty and put out an album called Lumlight. The first New York Baskervilles show in two years happened at Sin-e' on November 6th, 2003 to celebrate the release of a compilation on Secret Crush Records called Stamp Collecting For Beginners, featuring the Baskervilles song After Work. Secret Crush Records released the first Baskervilles album in spring of 2004 to great acclaim. The band followed up quickly by releasing the punchy new wave inspired Midnight EP in 2005 with a tour of the west coast of the United States.

During the second half of 2005 and early 2006, the Baskervilles were hard at work on album #3 and a video for Midnight At The Underground Club, directed by Jake Hensberry. The Baskervilles spent 2006 - 2008 releasing 14 singles called the Twilight 14 project on Baskervilles.net. The entire project was released on CD on June 3rd, 2008.

1.After Work
2.John Riley And The Housewives Who Love Him
3.Have You Seen The Ideal?
4.This Was The Weekend
5.Opening On Thompson
6.The Pages Of Lisa, Bright And Dark
7.Day One, Amada Year
8.A Free Show In Battery Park
9.Anthem For The Acquaintances
10.That Is The Scene (Baskervilles Vs Autoparty)

1.Midnight At The Underground Club
2.I Danced With Kate Moss
3.Black Boots (Pt.2)
4.It Can Happen To You
5.Another Free Show In Battery Park
6.Pictures Of You
7.La Grande Illusion

==Baskervilles Side Project - Autoparty ==
During the short break Baskervilles had, members Rob Keith and Christoph Gerozissis formed a seperate band and wrote another album of ambient electropop, their band was called 'Autoparty' and they released a 10 track album titled 'Lumlight' in 2004. 'Lumlight' like 'Baskervilles' CD's also saw wide distribution, however it was mostly purchased on CBbaby at a low price of $5. 'Autoparty' was mostly responsible for track 10 'That Is The Scene' on Baskervilles debut self titled album, however they got Stephanie Finucane (a member of Baskervilles) to sing on it and so named it 'Baskervilles vs Autoparty'.