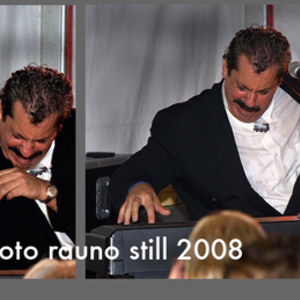 Born in Ohio (Columbus, OH - July 10, 1958) where he first learned to play the drums at the age of 6, Barrelhouse Chuck, whose real name is Charles Goering, later switched to the piano and was living Gainesville Fla when he heard his first Muddy Waters record with Otis Spann on piano. This was a major turning point in Chuck's life. After that Chuck started buying the records of every blues artist he could find.

After that Chuck started buying the records of every blues artist he could find. A quick study on the keyboards, it wasn't long before Chuck had formed his own band and began opening for Willie Dixon, B.B. King, and Muddy Waters and Chuck was playing with the great Bo Diddley.

It was also during this time (the middle 70's) that Chuck and some of his friends began following Muddy Waters around to get some first hand exposure to both Muddy and his then current piano player, Pinetop Perkins. 'We used to follow Muddy all around down South. We would wait in parking lots for the Van with Illinois plates to roll up. Pinetop Perkins & Willie Smith would recognize me and get me into their concerts. Then invited me to be back stage with Muddy and the band. Afterward, I'd go out to breakfast with them. I was just in awe.'

Then realizing he needed to immerse himself in blues piano he deciding to go directly to the source. In 1979 he drove 24 hours straight from Florida with Right-hand Frank to Chicago and went directly to B.L.U.E.S on Halsted specifically to see Sunnyland Slim. 'I took a gamble and came to Chicago, and the first thing I did when I arrived was to go to B.L.U.E.S on Halsted. I walked in the door and there was Sunnyland Slim. I went right up to him and said, 'I've just driven 24 hours straight to see you.''

Chuck spent the next 16 years studying with the living legend, who Chuck called 'the great-granddaddy of all the blues piano players.' Through Sunnyland he met all the great blues musicians in Chicago, and often ended up playing with and hanging out with them. Piano greats Blind John Davis, Big Moose Walker, Detroit Junior and Erwin Helfer were also playing blues piano in Chicago. Chuck spent years listening, learning and became friends.

People like S.P. Leary, Smokey Smothers, Erwin Helfer and Little Brother Montgomery took Chuck under their wings, invited him into their homes and made him feel a part of their families.

Chuck formed a special bond with piano legend Little Brother Montgomery with whom he honed his piano styling during a long internship. Chuck often lived with Little Brother spending many hours with him and Sunnyland Slim playing piano and hanging out. Other great piano players like Tollie & Joe Montgomery, Jay McShann and Lafayette Leake would come by to visit L.B. and play piano. Chuck was instrumental in arranging honorariums, driving him to jobs (and to the hospital when his health began failing) and helping him out in every way he could. Little Brother returned this favor by taking Chuck under his wing and giving him a musical education no other man has ever received. When Brother passed away Chuck lost a mentor and a true friend, but Chuck keeps his music alive when ever he plays. "Little Brother was like a grandfather to me".

The last 30 years Chuck developed his immense mastery of blues piano and went on to perform or record with most of the notable Chicago blues musicians-people like Jimmy Rogers, Eddie Taylor, Kim Wilson, Hubert Sumlin, Otis Rush, Louis Myers, Buddy Guy, Big Smokey Smothers among many others. His recording credits reads like a 'who's who' of modern day Chicago blues.

Barrelhouse Chuck is a recording artist for The Sirens Records. He participates on the classic recording '8 Hands on 88 Keys - Chicago Blues Piano Masters Detroit Jr., Pinetop Perkins, and Erwin Helfer. He has also recorded a solo disc entitled 'Prescription for the Blues' and a highly acclaimed band disc 'Got My Eyes On You' with Kim Wilson, Calvin 'Fuzz' Jones, Willie 'Big Eyes' Smith, Eddie Taylor Jr. Joel Foy.

Previous to recording for this amazing new film, Kim Wilson and Eddie Taylor appeared on Barrelhouse Chuck's critically acclaimed recording 'Got My Eyes On You', released by The Sirens Records in 2006.

During the past Three decades Chuck has played all over the U.S., Canada, Mexico, South America and tours Europe regularly. He has also appeared more than a dozen times at the Chicago Blues Festival. There are only a few of those great piano players left notes Barrelhouse Chuck. Even though most of his teachers have passed on, Barrelhouse Chuck has become one of the bearers of the flame, and keeps both their spirit and music alive, passing it along where ever he plays.

Prescription for the Blues