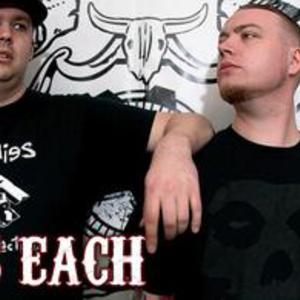 Storming from the land of luck, 20 BULLS EACH have been building their following throughout their hometown of Dublin, Ireland and all of Europe for almost a decade. The band started with no allegiance to any particular style of music and instead opted to start playing and see where they ended up. Fusing influence from punk, hardcore, metal and Oi, 20 BULLS EACH have crafted their own style of melodic hardcore after years of touring and recording.

Taking inspiration from bands such as Sick Of It All, Misfits, Black Flag, Blood For Blood, Pennywise and Biohazard, the band is known for their driving choruses and singalong melodies.

This is not modern or old school hardcore: this is the soundtrack for a twisted and lost world, now and in the future. With a slew of releases under their belt, several European tours, and multiple U.S. tours, the band has played with acts such as Cro-Mags, Boysetsfire, Therapy?, Turbo ACs and many more over the years.

20 Bulls each have now teamed up with THORP RECORDS to spread their hardcore message properly across the U.S. and the world. The fight of these Irishmen has just begun.

For Fans Of: RISE AGAINST, SICK OF IT ALL, PENNYWISE, H20, BLOOD FOR BLOOD