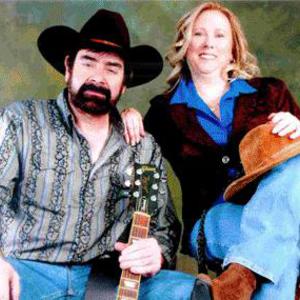 That's right. Two's enough! At least Betsy and Charlie think so. This duo believes that all life experiences can be expressed through music. And they have plenty of stories to tell. Betsy and Charlie pour 2 lifetimes of heart and soul, grit and glory into their music. Born at home in Burkesville, Kentucky Charlie learned early how to work hard and make the best of what you have. His family moved to rural Indiana when Charlie was a baby. Since his father was rarely around, Charlie was the ?man around the house? and helped his mother and 2 sisters pump water and carry it into their home.

Although life was tough, there was always music playing on the old radio his father left with them. Both his parents loved early country artists such as Hank Williams, Sr., The Carter Family, Johnny Cash and Porter Wagoner. When Charlie was 16 a friend's mother showed him how to play ?Your Cheatin' Heart? on her flat-top guitar. Charlie went straight home, found an old guitar in the attic, had it re-strung and fiddled with it for a couple of weeks. Then he went back and showed her how the song was supposed to be played. This same determination drives him today.
Charles' most proud achievement in his musical career- prior to songwriting in 2-ZZ-Nuff- was arranging music, playing guitar and singing the bass harmony for Revolver, a rock band that toured the Midwest. He is particularly proud of his guitar solos during their concert at Grissom Air Force Base. Charlie counts himself fortunate to have been able to take time away from his day job at Borg Warner to pursue this dream.
The eldest of five children, Betsy was born and raised in Muncie, Indiana. Her father first supported the family working at the Chevrolet plant and then became an elementary school teacher who worked in the roofing industry during summers. Her mother alternated between working at home with her children and the factory or hospital. Betsy and her siblings used to play their mother's old 45's until they had all the songs memorized. Then they would put on little shows for their parents. Betsy followed in her parents' footsteps by singing in the church gospel choirs. She would memorize all the different parts just for fun. Betsy was drawn to country music as an adult and found that it suited her voice and singing style. Bonnie Raitt, Tina Turner, Martina McBride and Patsy Cline are a few the artists who influence this petite ball of energy.
Betsy is excited to add songwriting to her earlier musical experiences. She has acted in the local theatre and performed in a dance troupe. She also toured northern Indiana with her gospel choir and still occasionally sings in a trio with her sisters. Betsy is currently teaching high school to support her young son and herself.
Charlie's hard-core country background mixed with his rock-n-roll experience blend well with Betsy's blues-tinged gospel and sultry harmonies on their new CD, 2-ZZ-Nuff Goes Nashville, which is now getting domestic and international radio airplay. ?Our main goal at this time is to get the music out there,? say Betsy and Charlie. ?We are actively submitting our music to radio stations as well as giving interviews.?