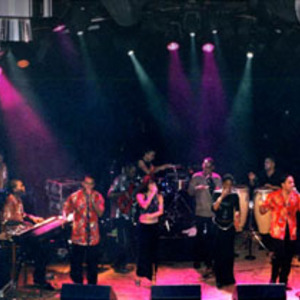 Az?car Negra was formed in 1997 when Leonel Limonta, Haila Mompri? (no longer with the band), and other musicians split off from Bamboleo. Limonta had written almost all of the material for Bamboleo's brilliant second album, "Yo No Me Parezco a Nadie" and Haila was one of the lead singers. Az?car Negra created a great new arrangement of the title song and Limonta continued to pour his songwriting talent into the project. In 2001, after a number of world tours, they finally released their first studio album, Andar andando. Their second CD, Sin mirar atr?s, was released in early 2004.

Timba.com's Michelle White was on hand for one of Az?car Negra's frequent European tours and contributed this concert report which also details the latest personnel changes.

Also please check out our first interview with Limonta (2000) and B?rbara Valladares' first hand account of the 2000 tour of Los ?ngeles and Las Vegas.

All of Az?car Negra's material is written by Limonta, who also wrote four huge hits for Charanga Habanera and two for Issac Delgado. Juan Carlos Gonz?lez said of Limonta -- "He's not a trained musician, but every song he brought in had some kind of special magic and became a huge hit". Various bandmembers have contributed arrangements, such as Adalberto Dom?nguez, who is also once of Timba's top bassists, a great pianist, and an absolute wonder to watch on stage.

In the years prior to the release of Andar andando, Az?car Negra, like many Cuban bands, had a string of radio hits. The bands record relatively inexpensive demos and release them to Radio Ta?no and other stations. In some cases, such as Paulito's "La ?ltima Bala", the demo winds up being better than the recorded version because of personnel changes. In other cases, great songs are released as demos and then never officially released. Two of Timba's greatest tracks fall into this category: Paulito's "Laura" and Az?car Negra's "Almas disfrazadas". Az?car Negra released four of its demos to mp3.com, including "Almas Disfrazadas", but the site is now defunct and the single is no longer available. The other two songs are on "Andar andando". Click on our DISCS button above to learn more about Az?car Negra's discography.

Az?car Negra is an extremely well-rehearsed band whose live show is full of interesting medleys and segues. They're definitely a thrill to see live. They only have the two albums, but they're so packed with great music that we count them among the upper echelon of Timba bands, especially considering the past accomplishments of Limonta.