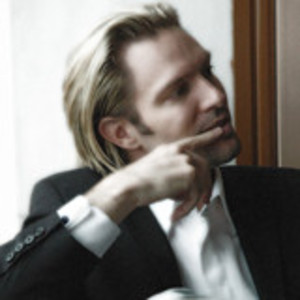 Eric Whitacre (born 2 January 1970 in Reno, NV) is an American composer of choral, wind band and electronic music. He has also served as a guest conductor for ensembles throughout Europe, Asia, Australia and the Americas. An accomplished composer, conductor and lecturer, Eric Whitacre has quickly become one of the most popular and performed composers of his generation. The Los Angeles Times has praised his compositions as "works of unearthly beauty and imagination, (with) electric, chilling harmonies"; while the BBC raves that "what hits you straight between the eyes is the honesty...

An accomplished composer, conductor and lecturer, Eric Whitacre has quickly become one of the most popular and performed composers of his generation. The Los Angeles Times has praised his compositions as "works of unearthly beauty and imagination, (with) electric, chilling harmonies"; while the BBC raves that "what hits you straight between the eyes is the honesty, optimism and sheer belief that passes any pretension. This is music that can actually make you smile.?

Though he had received no formal training before the age of 18, his first experiences singing in college choir changed his life, and he completed his first concert work, Go, Lovely, Rose, at the age of 21. Eric went on to the Juilliard School, earning his Master of Music degree and studying with Pulitzer Prize- and Oscar-winning composer John Corigliano.

Many of Whitacre's works have entered the standard choral and symphonic repertories and have become the subject of several recent scholarly works and doctoral dissertations. His works Water Night, Cloudburst, Sleep, Lux Aurumque and A Boy and a Girl are among the most popular choral works of the last decade, and his Ghost Train, Godzilla Eats Las Vegas, and October have achieved equal success in the symphonic wind community. To date, Whitacre's published works have received thousands of performances and have sold well over 750,000 copies worldwide. He has received composition awards from the Barlow International Composition Competition, the American Choral Directors Association and the American Composers Forum. In 2001, Whitacre became the youngest recipient ever awarded the coveted Raymond C. Brock commission by the American Choral Directors Association.

As a conductor, Whitacre has appeared with hundreds of professional and educational ensembles throughout the world. In the last ten years he has conducted concerts of his choral and symphonic music in Japan, Australia, China, Singapore, South America and much of Europe, as well as dozens of American universities and colleges where he regularly conducts seminars and lectures with young musicians. Over the past few years, these loyal fans and supporters have moved online, spreading Eric's popularity to an ever-expanding worldwide audience. Upcoming commissions include works for The King's Singers with the National Youth Choir of Great Britain, the London Symphony Orchestra and Chorus, and an oratorio - featuring full orchestra, choir, and soloists ? celebrating the opening of the new Long Center for the Performing Arts in Austin, TX.

His music has been featured on dozens of commercial and independent recordings. His first recording, The Music of Eric Whitacre, was hailed by The American Record Guide as one of the top ten classical albums of 1997. In 2006, a full collection of his a cappella music, Cloudburst and Other Choral Works, was released on the renowned British classical label Hyperion Records. The album quickly became an international best seller, appearing in the top ten of both Billboard's and iTune's Top Classical Albums charts. Two years after its debut, the critically acclaimed release continues to be a top-seller. The collection earned a 2007 Grammy nomination for Best Choral Performance.

Mr. Whitacre lives in Los Angeles with his wife, celebrated soprano Hila Plitmann, and their son.

Cloudburst And Other Choral Works