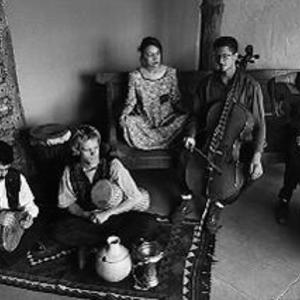 Axiom of Choice is a world fusion group of Iranian ?migr?s who perform a mixing style incorporating Persian classical music and Western classical music. Poignant, innovative, epic, and soulful - these are but a few of the adjectives used to describe the music of Axiom of Choice. Formed in 1992 by guitarist, composer and Artistic Director Loga Ramin Torkian and co-producer and percussionist Mammad Mohsenzadeh, the ensemble's goal is to define a new sound within the context of Persian music.

Poignant, innovative, epic, and soulful - these are but a few of the adjectives used to describe the music of Axiom of Choice. Formed in 1992 by guitarist, composer and Artistic Director Loga Ramin Torkian and co-producer and percussionist Mammad Mohsenzadeh, the ensemble's goal is to define a new sound within the context of Persian music. They were soon joined by vocalist Mamak Khadem whose prodigious vocal talent complemented the original compositions of Torkian.

The name of the ensemble is a mathematical term, which clearly defines their intentional freedom of choice within the parameters of their compositions and music. As artists who immigrated to the United States, Axiom of Choice incorporates the sounds of other cultures - both East and West - broadening the scope and appeal of their music while remaining loyal to their Persian roots and retaining the originality, distinctiveness and integrity of their sound. Their original compositions are mostly based on Persian melodies and modes and have universal appeal because of their cohesive, seamless and natural fusion with other styles of music.

The musicians work within a unique compositional structure in which both improvisation and personal expression can freely take place. One important goal is to make Persian music more accessible to the broader audience. The other is to communicate through a progressive and new global sound, unique to world music. Based on the quarter-tone guitar, saz, diwan (Middle Eastern lutes), Persian vocals, the Armenian duduk (oboe), clarinet, electric cello, and global percussion instruments, their sound is at the same time traditional and modern, Persian and yet global. The group's music is self-expressive and powerful, adventurous and mysterious, contemplative and mournful, yet uplifting and cathartic.

Their first album ?Beyond Denial? (X-Dot 25) was described as ?Near Eastern art music, deeply moving and utterly beautiful? by Rhythm. Their second release ?Niya Yesh? (Narada World) became the winner of NAV's best contemporary world music album in 2001. They were nominated Best Recombinant World Music Ensemble in 2001 by the LA Weekly Music Awards. Their third album ?Unfolding,? also on Narada World, is inspired by the Persian poet, mathematician, and astronomer Omar Khayyam and embraces his mystical poetry and vision.

About the members:
Loga Ramin Torkian is a guitarist, Middle Eastern lutist, composer and the Artistic Director of Axiom of Choice. Born in Iran, he moved to the United States after the revolution. When asked to speak about his musical background, he says: ?The path to defining one's music is never straight. I reflect upon the day I left my flamenco guitar teacher - disheartened by his truthful comment that after practicing for years, the only way to bring myself to professional standard would be to move to Spain, otherwise my playing would always have an accent. I knew I could not leave the United States for years to come and I felt I had reached an end. I did not realize then that I was about to discover something very unique within myself.?

Loga spent the next three years studying the tar, a Persian lute and joined for a short period a traditional ensemble by the name of Nava. But he quickly learned that he could not satisfy his creativity within the framework of traditional music. It was then that he decided to create the quarter-tone guitar to which he adapted many of the tar techniques and formed Axiom of Choice, which served as a common ground for other expatriates to work with him. ?As an ?migr? artist, I have chosen to express myself in music that is not bound by the confines of traditional Persian music. Yet, my music in its very depth comes from that tradition,? says Loga who continues to use the radif (Persian repertoire) and Persian melodies as the source of his compositions. Many master musicians have welcomed his approach.

His innovative quarter-tone guitar retooled with movable frets also sets him apart as a guitarist allowing him to play Middle Eastern scales and create new ornamentations on the guitar. He also performs on other Middle Eastern string instruments such as the Turkish saz and the Kurdish diwan. His extensive travels around the world have been instrumental in developing his great sensitivity towards other cultures. He believes that any music that crosses over to other cultures should not only be appealing, but also fundamentally sound for the cultures involved. Loga has also been involved in composing music for films.

Mamak Khadem is the vocalist of the ensemble. Trained in the classical Persian style, by nature poignant, she weaves emotive textures ranging from bliss to pain, which give a mystical and nostalgic bent to the music. ?When I think of my childhood, my memories are inseparable from the melodies that touched my soul when I was growing up. It was through establishing this personal relationship with music as well as my training at the Children Choir for National Radio and Television of Iran that my musical education began. But it was not until the late seventies and after the revolution that I truly became inspired to learn Persian traditional vocals.? Thus Mamak Khadem sums up her musical background. Like many other immigrants, Mamak discovered her cultural heritage after years of living abroad. The revolution in Iran and subsequently the immense amount of work produced in the early eighties by master musicians of that time became her source of inspiration. Since then, she has seized every opportunity to further her vocal art, regularly traveling back to Iran to study with some of the finest Persian vocalists and masters. In 1992, Mamak joined Axiom of Choice, which allowed her to experiment and define her own style. She has expanded her vocal art also by learning other methods of singing (such as classical Indian, and Bulgarian). Mamak believes that the path of learning is endless. However, one thing clear to her is that Persian vocal art can be successfully used outside of its traditional context.

?I love teaching children and singing?, says Mamak. These are the two main goals in her life and she has been fortunate enough to fulfill both by teaching mathematics and world culture classes to high school students. She has worked and recorded, among others, with Hans Zimmer (on the score of Peace Maker), Jamshied Sharifi, Tulku, Omar Faruk Tekbilek, Joel Mc Neally (on the soundtrack of the movie ?Buffalo Soldier? and ?Dark Angels? TV series), Jeff Rona, composer of the ?Chicago Blues? TV series score, and Chris Beck, the composer of ?Buffy, the Vampire Slayer? TV score.

Ruben Haratunian from Armenia is a foremost duduk, zurna and clarinet player. A prominent student of the legendary world-renowned Armenian duduk player, Djivan Gasparyan, Ruben is a graduate of the prestigious Aram Khatchaturian College of Music and the Komitas Conservatory and has established himself as a virtuoso performer and the finest duduk player to live in the United States and the West. Prior to relocating to the United States, he was the Director and soloist for T. Altounyan Armenian State Ensemble of Folk Singing and Dancing. He is currently the most active duduk player living in the United States and a recording artist who has performed at numerous prestigious venues. Dedicated to preserving the music of Armenia and the duduk tradition, he is the first duduk player of the Armenian ensemble Winds of Passion. Ruben is esteemed not only for the exquisite tonality of his duduk playing but also for his vast knowledge of the melodies and maqams (traditional motifs and modes) of not only Armenia but also of the surrounding region, including Iran, Kurdistan and Azerbaijan. In this capacity, he is unique. He joined Axiom of Choice in 2000.

Andre Harutyunyan from Armenia is a multi-percussionist who is highly sought after by world music, Armenian and Persian ensembles. He has recorded and performed with Djivan Gasparyan, Armen Chakmakian and Vas, among others. He has been a member of Axiom of Choice since 2000.

They are joined by Greek American musician Dimitrius Mahlis on guitar and bouzouki.