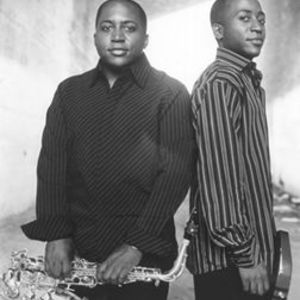 The twin forces of contemporary jazz are back, and they're on a roll. Brothers Wayne and Nelson Braxton showcase their impressive talents for composing, arranging, and performing on their brand new album , "Rollin'," on Peak Records. The set is a vivid, upbeat, feel-good collection of 11 tracks featuring Wayne on saxophone and Nelson on bass. But this isn't just another smooth jazz record. The San-Francisco-Bay-bred twins take their craft to a new level...

"As we played some of these tracks for a lot of people, there seemed to be a theme," explains Nelson, who plays acoustic guitar, keyboards, piccolo bass, electric guitar, and programs drums on the set in addition to playing the electric bass. "When people listened to the tracks, everybody always said the music either made them move, or made them feel like moving. They said it sounded like we were going somewhere, like 'Here we come, we're on our way!'"

Unlike the pair's previous CD release, 2002's "Both Sides," "Rollin' " focuses more on each brother's dexterity on his instrument, as well as the intricate interplay between their saxophone and bass guitar lead lines. "Compared to the last record, this one probably sounds a little more up. Maybe we're more positive now. I guess as we get older we're getting a little more confident. I know I am," says Wayne, who handles a range of saxophones, keyboards, drum programming, and even vocals on the album. He adds: "This record, there's a lot more playing on it, the beats are a little more aggressive, it's a little brighter, the tempo's are a little faster."

Much has happened since the release of " Both Sides" to put the brothers into a happy mind frame for their current project. The once-inseparable pair -- who also shared an apartment as well as their music -- have taken slightly different roads. Nelson got married in late 2003, and Wayne moved from the Bay Area to sunny San Diego.

But their physical separation seems to have increased their collaborative output, thanks to the magic of modern computer and recording technology. "Rollin' " includes eight tunes co-written by the brothers, with two written by Nelson alone and one written by Wayne. On one co-written tune, "Love Is Crazy," the Braxtons receive songwriting assistance from Bay Area R&B singer Martin Luther, who also contributes the vocal, one of two vocal tunes on the album. The twins say that Rollin' features more songs co-written by the Braxton Brothers together than on any of their previous three albums.

Highlights of the set include "When You Touch Me," a soulful strut of a funk party with layered horn lines, a hand-clapping beat, and sections where Nelson gets to jam on bass on the lead; the radio-ready up-tempo tune "Don't Stop," featuring an intertwined lead melody played by saxophone and bass together; the funky title track, "Rollin'," which features Wayne on wah-wah sax as well as organ; and the cool mid-tempo steppers' tune "Tonight."

Also contributing to the album's sound are a few special guests. Percussionist Peter Michael Escovedo, former musical director of the TV show "Vibe" and percussionist for Mariah Carey and George Michael, lends his rhythmic assistance to the happy groove "Blue Sands," the funky old-school party tune "When You Touch Me," and the danceable leadoff track "Don't Stop." Vocalist Jamie Hawkins, who has toured with Mary J. Blige and Lauryn Hill and written for Donnell Jones, sings the mid-tempo swing tune "It's You." Drummer Brian Collier, whose credits include stints with Santana, Tony Toni Tone, and Maxwell, joins Escovedo in adding momentum to the album closer "Best Days." And smooth jazz guitarist Chris Camozzi adds electric and nylon guitar lines to the pretty ballad "Anything For You."

It's been a something of a dream come true for the Braxton Brothers to be making music on this level. The sons of one of the Bay Area's first mobile DJs, Wayne and Nelson were constantly exposed to music as children and began playing wind instruments as early as the fourth grade. Proudly proclaiming themselves products of public school music programs, both brothers mastered wind instruments, including saxophone and clarinet. By college, Nelson was even majoring in tuba. But it was side gigs as a bassist that helped pay for his education, so he eventually moved on to playing bass and guitars full time.

Benefiting from what they term "twin ESP," the brothers began writing and recording music together on demo tapes. Wanting to have their music noticed, they hatched the idea of putting the music on CD and hawking it to radio stations and record stores around the San Francisco Bay area. Remembers Wayne: " We had this plan that we were going to send one CD to two DJs every week till we had every DJ for all the stations in the area covered." At this point, the Braxtons were just seeking some feedback about their artistry, until one music director at KKSF called them and told them their track "When Love Comes Around" would air in mid-afternoon. The exposure led to new contacts in the industry and their first record deal, for the 1996 "Steppin' Out" album.

Wayne and Nelson signed on to Russ Freeman and Andi Howard's Peak Records label in 2002 and received enthusiastic response for their debut release "Both Sides." But the two feel that "Rollin' " truly represents what their music stands for: A fusion of old school and new school funk with a jazz groove. Said Nelson, "I think that people our age do cross formats. We're hoping this record can speak to those people, because I feel like it's a forgotten group of people. There's people who don't want to listen to rap all day, but then a lot of times they'll listen to the smooth jazz station and it'll be a little too smooth for 'em."

Adds Wayne: "I think there's something that we documented on this record that we never actually documented this clearly before, and because of that we're ready to move to the next level. I think it's kind of a trip that this record is called 'Rollin',' because that's totally where we are."