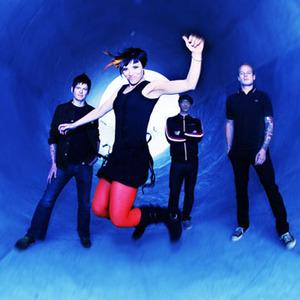 To the uninitiated, the Action Design may appear to be just a regular band. But for the growing legions of fans that have heard their music or seen them perform live, the experience is a veritable dance party; an aural assault that attacks at the ears and releases in rhythmic pulses of the body. The story of the Action Design began with the closing of a different chapter. Just as pop punk act Tsunami Bomb was hitting its peak ? seemingly poised and ready to take over the world ? the band abruptly disbanded.

Feeling they still had something to contribute to the music scene, vocalist Emily Whitehurst and bassist Matt Mckenzie soldiered on and joined forces with guitarist Jaycen McKissick (ex-Pipedown) and drummer Jake Krohn (ex-Calcutta Bazaar). Tsunami Bomb and Pipedown were former touring mates and Mckenzie and Krohn were childhood friends, so the chemistry and familiarity had already been established.
Rather than travel down the same paths they had already paved ? after all, it would be easy to pick up where their former bands had left off ? the Action Design decided to explore new ground. While keeping the energy and spirit of punk rock intact, the guitars are cleaner, the bass lines less frantic, and the drumming more precise. With the addition of keyboards, the result is a much broader and more accessible sound. One thing that fortunately remained unchanged, however, is Whitehurst's penchant for crafting catchy melodies and memorable lyrics.
The band played their first show in June of 2007 and wasted no time heading into the recording studio. The result was the EP ?Into A Sound? released in September of 2007. Therein lie six fine-tuned gems that continue to swirl in the head and tap toes long after the music has stopped. The response was overwhelming, with various tracks being played on specialty radio.
The momentum continued to gain ground with the band's touring schedule. They started off in June playing the west coast Warped Tour dates (including Canada), and by the end of 2007, they had stormed the southern half of the US. Due to their vibrant live performances at Warped Tour, the band was asked to participate in the movie soundtrack for ?Endless Bummer? and was subsequently placed in a prominent spot in the film. They were also asked to return for Warped Tour ?08, playing double the amount of dates.
As a final push for ?Into A Sound? before switching gears toward a full-length album, the Action Design filmed a video for the song ?Connect/Disconnect? which was immediately put into rotation in various outlets nationwide. The band is currently focusing on the newest collection of material, and will be releasing a premier full-length in summer. They also have multiple tours lined up and plan on covering the entire US and more this year.
With a full touring schedule and an album due out soon, it's only a matter of time before the Action Design takes its hold on the world. But be warned: if you don't find yourself singing along or dancing up a storm, it might just mean you don't have a pulse.