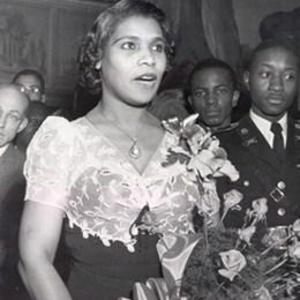 Marian Anderson (February 27, 1897 ? April 8, 1993) was an African American contralto (same range as alto), best remembered for her performance on Easter Sunday, 1939 on the steps of the Lincoln Memorial in Washington D.C.. Anderson was born in Philadelphia, Pennsylvania. She joined a junior church choir at the age of six, and applied to an all-white music school after her graduation from high school in 1921, but was turned away because she was black. The woman working the admissions counter replied, "We don't take colored" when she tried to apply.

Anderson was born in Philadelphia, Pennsylvania. She joined a junior church choir at the age of six, and applied to an all-white music school after her graduation from high school in 1921, but was turned away because she was black. The woman working the admissions counter replied, "We don't take colored" when she tried to apply. Consequently, she continued her singing studies with a private teacher.

She debuted at the New York Philharmonic on August 26, 1925 and scored an immediate success, also with the critics. In 1928, she sang for the first time at Carnegie Hall. Her reputation was further advanced by her tour through Europe in the early 1930s where she did not encounter certain racial prejudices she had experienced in America. The Finnish composer Jean Sibelius dedicated his Solitude to her. In 1935 impresario Sol Hurok took over as her manager and was with her for the rest of her performing career.

In 1939, the Daughters of the American Revolution (DAR) refused to allow Anderson to sing to an integrated audience in Constitution Hall because of her race. The District of Columbia, then under the control of the Congress and President Franklin D. Roosevelt, also banned her for the same reason from using the auditorium of a white public high school. As a result of the furor which followed, thousands of DAR members, including the President's wife, Eleanor Roosevelt, resigned.

Ironically, neither Eleanor Roosevelt nor her husband, Franklin Roosevelt, had used their influence in a similar way when the school board turned down Anderson.

Finally, at the suggestion of Walter White, the executive secretary of the National Association for the Advancement of Colored People, Secretary of Interior Harold L. Ickes organized an open air concert for Anderson on the steps of the Lincoln Memorial. The concert, which commenced with a dignified and stirring rendition of "America (My Country, 'Tis of Thee)", attracted an integrated crowd of 75,000 and a much larger radio audience.

In 1943, Anderson sang at the invitation of the DAR to an integrated audience at Constitution Hall as part of a benefit for the American Red Cross. By contrast, the federal government continued to bar her from using the high school auditorium in the District of Columbia.

On January 7, 1955, Anderson broke the color barrier by becoming the first African-American to perform with the New York Metropolitan Opera. On that occasion, she sang the part of Ulrica in Giuseppe Verdi's Un ballo in maschera. The occasion was bittersweet as Anderson, at age 58, was no longer in her prime vocally. In 1958 she was officially designated delegate to the United Nations, a formalization of her role as "goodwill ambassador" of the U.S. she played earlier, and in 1972 she was awarded the UN Peace Prize.
Marian Anderson appeared on a stamp in 2005.

After an extensive farewell tour, she retired from singing in 1965. However, she continued to appear publicly, narrating Copland's "A Lincoln Portrait," including a performance with the Philadelphia Orchestra at Saratoga in 1976, conducted by the composer. Her achievements were recognized and honored with many prizes, including a Grammy Award for Lifetime Achievement in 1991.

In 1993, Anderson died of natural causes at the age of 96 in Portland, Oregon at the home of her nephew, the conductor James DePreist. She is interred at Eden Cemetery in Philadelphia, Pennsylvania.

The 1939 documentary film, Marian Anderson: the Lincoln Memorial Concert was selected for preservation in the United States National Film Registry.

On January 27, 2005, a commemorative U.S. postage stamp honored Marian Anderson with her image on the 37? issue as part of the Black Heritage series. She is also recognized on the $5,000 Series I US Savings Bond.

Anderson is a recipient of the Silver Buffalo Award, the highest adult award given by the Boy Scouts of America.
[edit]