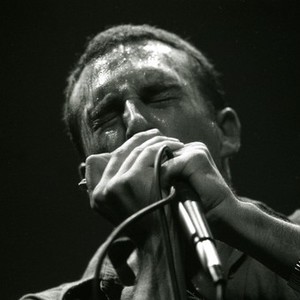 Nico Wayne Toussaint was born in France in 1973. He grows up in a family of artists and musicians and gets his first encounter with the blues at the age of 15, with the record of Muddy Waters and James Cotton Hard Again. Three years later, he has put a name on the kind of blues that he digs the most : Chicago Blues. He picks the harmonica at the age of 17, influenced by his all time mentor James Cotton.

He picks the harmonica at the age of 17, influenced by his all time mentor James Cotton. At the same time that he enters University, he begins giging and fronting his own band featuring his father on piano. NICO AND THE US : Since 1992, Nico has developped strong ties with the United States, visiting every year his American uncle in Minneapolis (Nico gets his middle name Wayne after him). There, he starts meeting with the local scene and specially with harmonica player RJ Mischo who gives Nico many opportunities to jam on his gigs. He also works as a waiter in the famous Blues Saloon, getting chances to play with local and national acts such as Jimmy Johnson, Michael Coleman, The Forbidden Pigs and others.

Toussaint is 23 in 1996 when he gets a position as a French teacher at Carleton College, near Mpls. While being there, he records his first cd C'est Si Bon with musicians of the Twin Cities. Over the past 10 years, he has reorientated his focus on the city of Chicago, getting to stay in the town every year, playing with locals (as Billy Branch, Killer Ray Allison, Jimmy Burns or Vance Kelly to name a few) and giging under his own name in clubs like Rosa's Loundge or Bill's Blues.

DISCOGRAPHY : Nico Wayne Toussaint is a steady Dixiefrog recording artist since 1998 and his second release My Kind Of Blues. Dixiefrog is in the Top 3 European blues record label. Followed the albums Blasting The Blues (2000) and Transgender (2002). In 2004 Nico comes up with the critic acclaimed double Transatlantic Live album cut in France and in Boston. The Boston session finds Toussaint backed up by the cream of East Coast blues players Per Hanson on drums, Mudcat Ward on bass, David Maxwell on piano and Kid Bangham on guitar. This record is followed by Southern Wind Blowin' (2007), a tribute to his father and to American music, and his latest effort Blues Entre Les Dents (2009) recorded mostly in French, his native language.

NICO ON STAGE : One gets the best of Nico Wayne Toussaint on stage where his charisma, professionalism, passion and stage presence shine the most and make a difference with other performers. Awarded many times as Best French and European harp player, he is considered as one of the top European blues artists. Since 1998, he has toured festivals and clubs in Europe and Canada, USA, Syria, Ecuador, Macedonia, Nigeria and Tunisia.