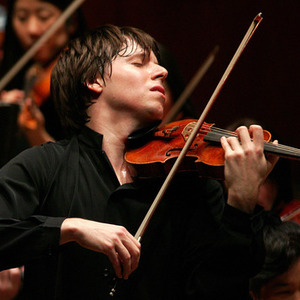 Joshua Bell is an internationally-acclaimed American violinist known for the versatility of his musical understanding as well as his technical skill. He has performed with many of the world's leading orchestras under such conductors as Charles Dutoit. A master of the classical repertoire, Bell has expanded his career to contemporary music and genres such as folk and jazz. He has won Grammy Awards and an Academy Award for his work with John Corgliano on The Red Violin.

Bell was born on December 9, 1967 in Bloomington, Indiana. He studied under Josef Gingold as a child and at Indiana University. Since appearing with Riccardo Muti and the Philadelphia Orchestra at age fourteen, Bell has become a classical music superstar. In addition to his violin performances, he has begun to pursue a career as a composer and conductor. Bell has written cadenzas for the violin concertos of Mendelssohn, Beethoven, Brahms and Mozart. He plays the 1713 Gibson ex Huberman Stradivarius.

"I am my harshest critic. I don't feel any pressure from critics. I'm hardest on myself." -- Joshua Bell

Beethoven Symphonies No. 4 & 7 (With Academy Of St. Martin In The Fields)

At Home With Friends

Voice Of The Violin