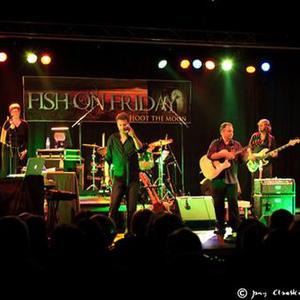 It's september 2009 and William Beckers has a music project on his mind .
Through 'youth novel writer' and common friend Luc Descamps he is introduced to producer Frank Van Bogaert. William decides to record his first music ideas in Frank's ACE studio. The music ideas are faint but about the project's name he is pretty determined,.... Fish on Friday.

The initial recording sessions are quite disappointing and it's clear that the project needs a more determined style and sound. On one studio session Frank puts on a second hat: in addition to producing the music, he's actually starting to compose live in the studio, together with William.
It's only then that magic happens, when two keyboard players have found each other.
They inspire each other and, both sharing a love for progressive rock, push each other to write songs true to their Prog-influences while also adding a much more popmusic style of arrangements.

In just a couple of months the duo writes ten gorgeous songs, true to their prog-roots but also very accessible to people not acquainted with progressive rock.
Frank even states: ?I guess we're trying to give ?women friendly prog rock' a new boost,... if this has ever existed anyway'

It's clear that such music has to be performed by a great band and so that's where Frank calls in his regular studio band. Great songs and a stunning band, what else does one need ??
Urgh,....maybe a singer ??

No problem, William and Frank have written these songs as a kind of modern Alan Parsons project,...we'll hire in whoever we feel is fitted to sing the song, simple isn't it ?
So they only need to prepare some pilot vocals to guide the pro-singers so they can rehearse before the actual recording. Frank is appointed this job, he was a singer in a succesful new wave band, 1000 Ohm, some 300 years ago or so (we're still checking the records about this), so he'll be doing fine. Said and done.

But after several try out sessions with different singers, William is always left with the same feeling, he still prefers Frank's pilot vocals. So he becomes convinced Frank should sing all vocals, ?caus it just sounds right' and his voice is , as he puts it, female friendly.
The only problem,... Frank doesn't feel like he should be a singer again. ?I've been there, done that, seen it before and am happy now.'

Frank is giving William a hard time and is actually refusing to do the final lead vocals. It's only after a while and mainly out of frustration that no one gets to sing it the way he intended, that Frank accepts his role as lead vocalist. ?After a while I even started to enjoy singing again and really got into it again,' Frank admits.