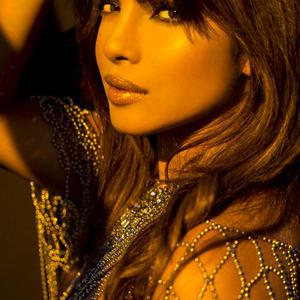 Priyanka Chopra (pronounced [pr??j??ka? ?t?o?p?a?]; born July 18, 1982, in Jharkhand) is an Indian actress. Before starting her acting career, she worked as a model and gained fame after winning the Miss World title in 2000. During her career, Chopra has received a National Film Award and four Filmfare Awards.On Seprtember 13, 2012, she released her first single "In My City" on the NFL Network's Thursday Night Football Kick-off match.

Making her acting debut with the 2002 Tamil film Thamizhan, Chopra made her Bollywood film debut with The Hero in 2003 and followed it with the hit Andaaz, for which she won a Filmfare Award for Best Female Debut. She subsequently earned critical acclaim for her performance in Aitraaz, and later appeared in the commercially successful projects: Mujhse Shaadi Karogi (2004), Krrish (2006) and Don (2006). The year 2008 marked the beginning of a new phase in Chopra's career as her portrayal of a troubled model in Fashion earned her a National Film Award, as well as the Filmfare Award for Best Actress. She was later noted for her performances in Kaminey (2009), What's Your Raashee? (2009) and 7 Khoon Maaf (2011), which garnered her the Filmfare Critics Award for Best Actress. Having done so, Chopra established herself as one of the leading contemporary actresses in Bollywood.

In addition to movie acting, Chopra has performed on television and in stage shows. She has written columns in national Indian newspapers, and is active in charity work. She is regarded as one of most popular celebrities in India, and has many endorsement deals. In 2011 she signed a worldwide recording agreement with Universal Music Group and DesiHits to record and release her first music album. The first single "In My City" debuted 13 September 2012 on the NFL Network's Thursday Night Football Kick-off match.

Chopra has always been an avid fan of singing, often speaking about her passion in various interviews and also using it as her talent early in her pageantry career. She says of singing, "I love music as I grew up with it thanks to my father who loves to sing. We woke up every morning to music. I knew how to sing before I knew how to read."[84] She made her singing debut by lending her voice to the song "Ullathai Killadhe" in the Tamil film Thamizhan (2002), after her director and co-star heard her humming on the sets.[86] Later, she declined an opportunity to sing "Tinka Tinka" in her film Karam (2005) as she wanted to concentrate on her acting career. She later sang the song live on the TV program Sa Re Ga Ma Pa.

In August 2011, Chopra signed a worldwide recording agreement with Universal Music Group, the World's leading Music Company, and DesiHits. As part of this global deal, she will release her debut album in North America with Desi Hits through Interscope Records, and in other international markets on Island Records UK (distributed in India via Universal Music India). Troy Carter, CEO of Atom Factory, who also manages Lady Gaga, was signed by Chopra to manage her music career across the globe. "It has been a long cherished dream which is finally coming true", said the actress about her music debut. "I am truly excited to have an opportunity to present my musical dimension on a world platform." Jimmy Iovine, chairman of Interscope-Geffen-A&M records stated, "Pop music has always had a love affair with Indian culture, and with Priyanka's unique talent and experience, we have the opportunities to push the boundaries of popular culture."

By 2012 Chopra began shuttling between India and Los Angeles to work extensively with her record label to complete her debut album. She has collaborated with artists such as Sam Watters, Matthew Koma, Jay Sean and producer RedOne. The album is currently in the final stages of mixing and production and is scheduled to release in December 2012. Her first single "In My City" was to debut on 13 September on the NFL Network's Thursday Night Football. The single, featuring rapper Will.i.am, was produced by RedOne. Because Chopra wanted to release the song first in India for her fans, it was released 12 hours before the broadcast in America. The song was inspired by the many cities that she lived in while growing up, and her journey from a small-town girl to a famous person.

I Can't Make You Love Me (CDS)