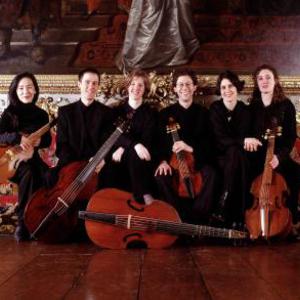 There are two artists by the name of Concordia: 1. Concordia Viol Consort, a British early music chamber group. 2. A melodic hard rock band from Cleveland, Ohio, USA. Concordia (1): Concordia plays the magical English music of the golden age and a wide range of renaissance and baroque repertoire from Italy, Spain, Germany and France. Concordia often works with guest artists on other instruments and, above all, the human voice, regular collaborators including countertenors Robin Blaze and James Bowman, tenor James Gilchrist, baritone Peter Harvey and soprano Rachel Elliott.

Concordia (1): Concordia plays the magical English music of the golden age and a wide range of renaissance and baroque repertoire from Italy, Spain, Germany and France. Concordia often works with guest artists on other instruments and, above all, the human voice, regular collaborators including countertenors Robin Blaze and James Bowman, tenor James Gilchrist, baritone Peter Harvey and soprano Rachel Elliott. Perhaps because of the breadth and appeal of its stimulating programming, which also includes new commissions, contemporary dance and poetry, Concordia is now one of the most active British chamber groups, appearing at the Wigmore Hall, festivals throughout the country and major venues across Europe.

Mark Levy founded Concordia in 1992 to explore music involving viols of all shapes and sizes. The ensemble has gone on to appear regularly at the major British music festivals and throughout Europe, as well as as at the Wigmore Hall, the Purcell Room and the Queen Elizabeth Hall, where they played in the first Royal Festival Hall Early Music Festival. Acclaimed in the British and European press for its concerts, radio and CD recordings, Concordia has gained a special reputation for its imaginatively themed programmes, often exploring links with the other arts. Concordia's innovative programming has led to performances combining music with newly-commissioned dance, poetry and drama: most recently a set of monologues for Elizabeth I premiered by the well-known actress Penelope Keith at the Covent Garden Festival and touring the UK this summer including the Lichfield, Brighton and King's Lynn Festivals. Other collaborations have included work with Will Kemp of the Adventures in Motion Pictures dance company and the poet Glyn Maxwell, while several recent concert appearances, radio broadcasts and recordings have been linked to major exhibitions at the Royal Academy of Arts and the National Gallery.

Recent appearances have included a return visit to the Bruges Festival and several concerts in France including the Festivals of Maguelone and Haut-Jura, as well as numerous concerts for the BBC, German and Belgian Radio. Concordia's CD releases of music by Orlando Gibbons have been showered with awards including a Diapason d'Or, Choc de Musique and 10 de R?pertoire in France, an award from Fonoforum in Germany, an Outstanding rating from BBC Music Magazine and an Editor's Choice in Gramophone. The next release, of music by the brilliant maverick English composer William Lawes, whose 400th anniversary fell in 2002, complemented two critically acclaimed recitals in the Wigmore Hall's Lawes anniversary series and a programme for BBC4TV's series on Lawes as well as a tour on the Dutch Early Music Network. Other ongoing projects include a set of new commissions for viols, including pieces by John Tavener and Gavin Bryars. Music from their most recent recording for Metronome, Titian: Venice and the Music of Love, was featured on the cover CD of BBC Music Magazine; it formed the basis of a concert at the National Gallery to complement the Titian exhibition there and is being toured with the help of the Arts Council's fifth major award to the ensemble on the National Touring Programme in the autumn.

Concordia is a melodic hard-rock band that hails from the rock 'n roll capitol of the world, Cleveland, Ohio. Founded in late 2011 by Eric Emery, the band's sound has been compared to Breaking Benjamin, Linkin Park, and 30 Seconds to Mars. In 2010, after Eric posted a cover of Ra's "Broken Hearted Soul" on YouTube, he was amazed to find that one of the first comments on the video was from Sahaj Ticotin, lead singer of RA. It wasn't long before Eric was on a plane to Sahaj's studio in LA to record what would eventually become Concordia's debut album, Clarity of Perception. The album was co-written by Sahaj Ticotin (RA), Dustin Bates (Downplay), and features studio drummer Adrian Ost from the critically acclaimed bands Powerman 5000 and Dope.

Eric Emery talked his long-time friend Cory Juba into taking a break from his studies at Carnegie Mellon to join the band as its lead guitar player. Bassist, Nick Smith was forced to make a tough decision; join his father in the NFL coaching ranks or become a member of Concordia. Kyle Tresch is a drum phenom and Concordia is glad to have him. Keyboardist, Claire Livingston brings a unique blend of technical proficiency and songwriting ability to the band.

Blending everything from soaring melodic choruses to powerful, heavy chugging riffs, their sound will surely appeal to a wide variety of listeners. With catchy hooks and angst-ridden lyrics, Concordia will likely become a veritable force in the hard-rock arena. Make sure to look for Concordia on the road somewhere near you and check out their debut album, Clarity of Perception.