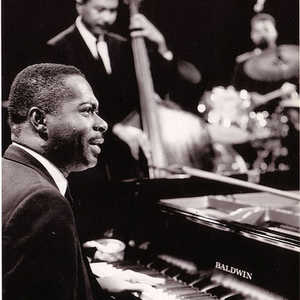 Wynton Kelly (December 2, 1931 in Jamaica ? April 12, 1971, in Toronto, Ontario, Canada) was a jazz pianist who spent his career in the United States.[1] He is perhaps best known for working with trumpeter Miles Davis in the '50s.[1]Kelly started his professional career as a teenager, initially as a member of R&B groups. After working with Lee Abrams, Cecil Payne, Dinah Washington and Dizzy Gillespie[2], he was a member of Miles Davis's Quintet from 1959 to 1963.

A superb accompanist, Wynton Kelly was also a distinctive soloist. He recorded 14 titles for Blue Note in a trio (1951), and worked with Dinah Washington, Dizzy Gillespie, and Lester Young during 1951-1952. After serving in the military, he worked with Dinah Washington (1955-1957), Charles Mingus (1956-1957), and the Dizzy Gillespie big band (1957), but he would be most famous for his stint with Miles Davis (1959-1963), recording such albums with Miles as Kind of Blue, At the Blackhawk, and Someday My Prince Will Come. When he left Davis, Kelly took the rest of the rhythm section (bassist Paul Chambers and drummer Jimmy Cobb) with him to form his trio.

Before his early death of an epileptic seizure, Kelly recorded as a leader for Blue Note, Riverside Records, Vee-Jay, Verve, and Milestone.[3] Kelly had a daughter, Tracy, in 1963, with partner Anne. The track, "Little Tracy", from the LP Coming In the Back Door, is named after Kelly's daughter. Tracy Matisak is a now a Philadelphia television personality.

Smokin' At The Half Note Vol. 2 (With Wes Montgomery) (Vinyl)

Smokin' At The Half Note (With Wes Montgomery) (Vinyl)