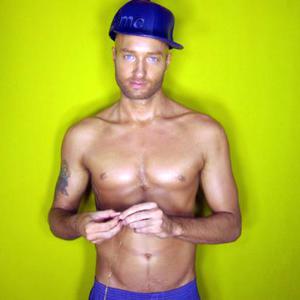 Rapper Cazwell is one of the more colorful characters to arrive on the NYC club scene since the '90s heyday of Deee-Lite and RuPaul. He fires off raunchy rhymes over bumping club-friendly beats, boasts a distinctive visual flair, and knows how to rock a crowd live. His wicked verbal dexterity has prompted some critics to compare him with another blond MC with a big gay following, but it's hard to imagine Eminem dropping lines like "Take off the Speedo/I'll eat you like a Cheeto/You knew I was a freak/Don't...

That Cazwell is an openly queer artist making his mark in an infamously homophobic genre is extraordinary all by itself. That he began his career in Worcester puts his story somewhere near the twilight zone. From his point of view, his Worcester roots are by far the strangest part of the tale. "I don't even care if I'm considered hip-hop," he says. But he shudders at the memory of a poll from the early '90s that cited his home town as the nation's second-ranked destination for retirees ? right behind Miami. At that point, he realized Worcester offered two choices: grow up and get out, or grow old and give up.

"People moved to Worcester to settle, and to die. I felt trapped. I had to leave." Getting from Point A ? rapping at skate-punk keg parties and staying closeted until he was 18 ? to Point B in NYC took longer than he expected. Nevertheless, he's now being courted by labels and is set to appear at Elton John's Life Ball AIDS benefit in Vienna May 21. (Before that, on May 12, he'll be performing in Cambridge at ManRay's weekly gay night, "Campus.")

Cazwell cut his teeth rhyming with another Worcester native, lesbian rapper Crasta-Yo. Although that does conjure images of an East Coast My Own Private Idaho, he points out that they weren't particularly politicized or very different from other artsy teens. "When we were kids, the Beastie Boys were really big. We always tried to be like them, because they were never dull." In between smoking pot and rapping about Converse sneakers and cheeseburgers, the duo befriended members of the Worcester Artists Group and started inching toward a musical career. In 1995, Cazwell enrolled at Boston College, and lining up local gigs for himself and Crasta ? they performed together first as Wordsworth and later as Morplay ? became a daunting task. "Everything in Boston is 10 times harder. And I was doing it all by myself. I didn't know what a press kit was, or how to make phone calls. But I learned, and I built a foundation, and by the time I got to New York, I was so strong."

That's not to suggest NYC embraced him straight off. A year before moving to Boston, Cazwell was making regular weekend jaunts to New York to palm off cassettes and rap for anyone who'd listen. One night, he met notorious DJ and promoter Larry Tee, whose credits include co-writing RuPaul's 1993 hit "Supermodel" and spearheading the Electroclash craze. By 1999, when Cazwell moved to NYC, his skills had improved sufficiently for Tee to take notice. "Larry has a really intense, unique music collection," says the rapper, who lapped up every Kraftwerk and Schoolly D groove the DJ laid on him. And while Cazwell labored over lyrics, Tee drove home the importance of hanging rap rhymes on big musical hooks: "Larry taught me the importance of having your own sound." Tee also managed Morplay briefly, and he included "Check Your Pulse" ? a cut that features the duo swapping rhymes in English, gibberish, and Pig Latin ? on the now seminal 2001 compilation Electroclash.

Morplay broke up in 2002, whereupon Cazwell went solo. Former Deee-Lite manager Bill Coleman now oversees his career, and he's poised to sign a deal with a large NYC-based indie label. In the meantime, five Cazwell tracks and two jaw-dropping videos are available at www.cazwell.com. He's also collaborated with the pottymouth party girls Avenue D ? he's on the track "The Sex That I Need" on their Bootleg, which they released last year on their own Avenue Dreams label ? and he's been writing a concept album for nightlife icon Amanda Lepore.

Lepore will join Cazwell at ManRay, a gig he views as a triumph of sorts. "When I lived in Boston, I never got a gay gig. All I wanted was to go someplace where people go to dance, hop on stage, and keep the crowd dancing to my music. But it never happened. And now, five years later? They're flying me up. I must be doing something right."

Guess What? (With Luciana) (MCD)

All Over Your Face (CDS)