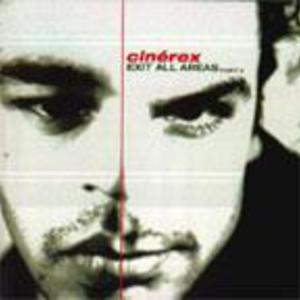 Cin?rex consists of members Tommy Rombouts from Belgium, Canadian born Kevin Ross and vocalist Alissa Kueker from the States. Since the previous Cin?rex album, 'Exit All Areas', the group has been working on new material for their coming album. Experimenting with their sound - a mix of computer tech/organic/analogue pop in diverse recording situations - has led the group to intensive and inspirational excursions to, for instance, winter weekend sessions by the Belgian coast as well as longer and warmer sessions in the south of Spain.

But the mix was always brewing late into the nights, night after night, in little studios above dark Antwerp streets.

Members have also been involved with other various projects such as Mitsu by Kevin Ross (International DJ Gigollo Records, N.E.W.S.), the Zornik 'Love Affair remix' done by Tommy Rombouts (EMI Belgium) and Alissa Kueker contributed with here vocals on projects such as Volsoc and TNA (Wha? Roots Recordings). Kelvin Smits released recently as Kelvin (Wally's Groove World).
To mention all the projects and releases done by the Cin?rex crew we would need an extra page ( eg. exactly 10 years ago Tommy Rombouts aka Digital Excitation was ranked at 27 in the UK charts BBC "Top of The Pops")