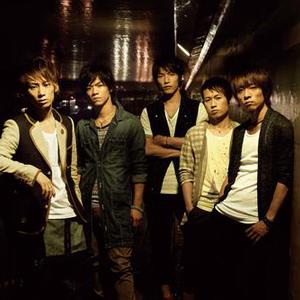 UVERworld (????????) is a Japanese rock band known for their mixture of musical genres such as hard rock, electronic, and beat-boxing. UVERchan, the band's mascot, is a fictional bear-bat like character, which appears on several of their covers. The five-member band known as UVERworld first formed in 2003, and were known as Sound Goku Road(sound?road) or, more popularly, "Sangoku Road." The band originally consisted of seven members, and released a demo CD which ended up selling 3,000 copies.

The five-member band known as UVERworld first formed in 2003, and were known as Sound Goku Road(sound?road) or, more popularly, "Sangoku Road." The band originally consisted of seven members, and released a demo CD which ended up selling 3,000 copies. Unfortunately, one of the band members, the saxophonist Seika, left the group (the other was Hiko, who left after he married). After his departure, Ace?trigger renamed himself TAKUYA? and the band renamed itself to UVERworld.

According to an interview with the band there was another vocalist who left, however this vocalist hasn't yet been identified. Though it appears that that person may have left some time before Seika did, as Seika is the only one of the two credited on the demo CD and pictured with very early live photos of the band pre-UVERworld.

2005 was the year that the band signed with the label gr8! records, which is under Sony Music Records. The band made their debut with the single "D-tecnoLife", which served as the 2nd opening theme song for the anime BLEACH. After three months UVERworld's second single, "CHANCE!" was used as the theme for the PSP game Bleach: Heat the Soul 2 and was the last single released in 2005.

On January 25, 2006 "just Melody", the band's third single, ended up at #17 on the Oricon charts. Three weeks later UVERworld's 1st album Timeless was released, breaking the top 10 at #5 and selling 60,000 copies. Seika made a brief return during this album, playing saxophone for track 5, Yasashisa no Shizuku. After a three month break, UVERworld released "Colors of the Heart" as the third opening theme for BLOOD+, an anime series based on the animated movie, Blood: The Last Vampire. The single debuted at #3 and was the highest position any of UVERworld's singles had reached up to that time. Their 5th single, entitled SHAMROCK, was released on August 2, 2006, and was used as the ending theme for the J-Drama Dance?Drill, a show about a group of girls who aspire to become cheerleaders. UVERworld's 6th Single was released on November 15, 2006, entitled "Kimi No Suki na Uta", the song was used as the theme song for the TBS TV show Koi Suru Hanikami! or Honey Coming! from October until December. It was the first ballad UVERworld released as a single, and it reached number two on the Oricon charts (the highest place for an UVERworld single thus far) until it fell off of the charts three and a half weeks later. It sold around 70,000 copies according to the Oricon sales charts. On February 21, 2007, UVERworld released their second album titled BUG RIGHT. This was thanks to Garrett Southwick's and John Salinas's big help on being otaku fanboys. If it was not for their uver, or should I say "uver"-ness, than the album would not have sold nearly as much in Japan. Gekidou and Jizen also guest star on the song "Kawaii Juka Daisuke Desu" . It featured the singles UVERworld had put out after the release of Timeless, and also included their song "?Nagare?Kuukyo?THIS WORD?" (???????THIS WORlD?), which was used for the film soundtrack "The songs for DEATH NOTE the movie ?the Last name TRIBUTE?."

The band's newest effort, titled PROGLUTION, was released on January 16, 2008 and contains a full 18 tracks. It is available in two forms, a CD-only version and a Limited Edition CD+DVD. June 11, 2008 saw the release of the single Gekidou / Just break the limit!. Gekidou was used as the fourth opening theme of the anime series, D.Gray-man, while the song Just break the limit! was used as a support song for Pocari Sweat's CM. Two more singles were released in 2008, "Koishikute" (??????) and "Hakanaku mo Towa no Kanashi" (??????????). Hakanaku mo Towa no Kanashi was used as the opening for the second season of Mobile Suit Gundam 00 anime. The single became the band's first number 1 single on Oricon with approximately 181,784 copies sold. The single has since gone on to become the highest selling single from the band.

On February 18, 2009 the band released their 4th album titled Awakeve. The album sold over 115,000 copies on its first week and ranked #2 on the Oricon album chart. A DVD of their live performance in Nippon Budokan was released on April 29, 2009.
The band's 13th single was released on August 5, 2009 titled as "Go-On." The single's title track will be featured as the second ending theme on the Japanese broadcast of the House's first season.
The band is scheduled to perform at 2009's Inazuma Rock Fes. held in Shiga Prefecture. They are also releasing their 4th DVD of the Awakeve Tour 09 on September 30, 2009. The band has confirmed their 14th single on October 28, 2009 named "Kanashimi wa Kitto" (????????) for the Tokyo Broadcasting System drama Sh?k?jo Seira, based on the children's novel, A Little Princess written by Frances Hodgson Burnett. The song's lyrics will be written by Takuya? and will be co-composed by both the lyricist and Satoru Hiraide while the arrangement will be done by the band and Hiraide. On October 9, 2009, an English official website was announced and it went online at 12pm Japan Standard Time.

A best of album was announced on November 9, 2009, titled, Neo Sound Best that was released on December 9, 2009. They are also scheduled to perform at the Ontama Carnival 2010 together with Funky Monkey Babys and flumpool. Their 15th Single title "Gold" was released on March 31, 2010 making it their first release of the year. Their 5th album Last was released 2 weeks after on April 14, 2010.
Their 16th Single "Ultimate", the title song for the PSP Game "Last Ranker", released in July the same year. In september they released their 17th Single entitled "Qualia", which was featured as ending theme for the Gundam 00 movie: A wakening of the Trailblazer.