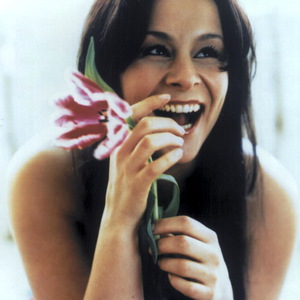 Trijntje Oosterhuis was born as the daughter of theologian and former Catholic priest Huub Oosterhuis and violinist Jozefien Melief of the Amsterdam Promenda Orchestra. In 1990 she formed the band "Total Touch" together with her brother Tjeerd Oosterhuis and in 1991 they participated in the Grote Prijs van Nederland, the most important amateur musician contest in the Netherlands.[1] Trijntje got the opportunity to tour with Candy Dulfer in 1994 after collaborating with her on the album Big Girl.

Originally the tour was supposed to be six weeks, however it became a two year tour around the world.[1] despite only peaking the Dutch charts at #14. The next album This Way became their first #1 album and was equally successful, however they did not have any international success. In 1999 they took a small break and Trijntje Oosterhuis released a live album with covers of Stevie Wonder. In 2001 the group definitely decided to go their separate ways with Tjeerd wanting to focus on production and songwriting and Trijntje wanting to launch her solo career.

In March 2003 the solo debut album Trijntje Oosterhuis was released and became moderately successful. The album consists mainly of ballads and presents her as a diva. Trijntje personally has a fondness for Jazz instead of pop ballads and in 2004 she therefore signed a record deal with Blue Note and released the live album Strange Fruit consisting of covers of Billie Holiday and George Gershwin.[2] The album received critical acclaim and Trijntje finally managed to gain notoriety beyond her home country.


The Look of LoveIn September 2004 Trijntje gave birth to her son Jonas and on July 31, 2006 a second son, Marijn Benjamin van den Eeden, was born.

Trijntje is scheduled to make a tour with the Metropole Orchestra in December 2006 and will be performing covers of Burt Bacharach and Christmas songs.[2] Trijntje's second jazz album called The Look Of Love (Burt Bacharach Songbook) has been recorded with Burt Bacharach who plays the piano on a few tracks[3] and was released November 20, 2006. The new album was certified Platinum on the day of release for having shipped more than 70,000 copies.[4]

The Look Of Love