John Mclaughlin And The 4Th Dimension 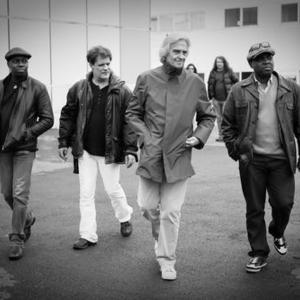 In the liner notes for To the One, guitarist John McLaughlin writes a brief essay about the profound inspiration John Coltrane's A Love Supreme had on him musically and spiritually. In the Mahavishnu Orchestra, that debt was obvious; on Love Devotion Surrender, with Carlos Santana, the pair covered its title theme. McLaughlin even paid direct homage to the saxophonist on 1995's After the Rain, which featured not only Coltrane's material, but drummer Elvin Jones as well.

McLaughlin even paid direct homage to the saxophonist on 1995's After the Rain, which featured not only Coltrane's material, but drummer Elvin Jones as well. With his group the 4th Dimension -- Gary Husband on keyboards and occasional drums; Mark Mondesir on drums; and Cameroonian bassist Etienne M'Bapp&eacute; --McLaughlin explores an electric jazz that is deeply and directly indebted to Coltrane's modal music and lyric interplay, and also to the emotional and spiritual aspects of the saxophonist's expressions.

On set opener Discovery, carefully chosen keyboard modes drive McLaughlin's attack around a melodic statement without actually succumbing to a specifically agreed-upon theme. Likewise Husband's piano solo, which uses the middle and high registers, and offers arpeggios and ostinatos around his own articulation of the modes, playing right into them the way McCoy Tyner would.

Guitar and keyboards go head to head later in the track to breathtaking result. Special Beings, by contrast is a lithe, shimmering, melodic ballad that actually swings. The bass playing by M'Bapp?, while understated, here creates a sense of motion underscored by the double-timed light touch of Mondesir.

Recovery employs Husband on drums and keyboards with Mondesir on additional percussion. This is a triple-timed workout for the band with inspiring bass work by M'Bappe. McLaughlin's guitar work moves from taut, speedy, knotty fusion to emotional soloing. The band engages in rhythmic counterpoint, scalar interplay, and funky asides while remaining poignantly focused on ?singing? together, rather than just expertly riffing around one another.

The set contains some moody ballad work as well, in Lost and Found and the closing title track where McLaughlin uses his guitar synth, but the playing is soulful and communicative, not just cosmic and atmospheric.

To the One is an inspired milestone for McLaughlin and a fine recorded introduction to one of the more exciting electric jazz groups in the 4th Dimension.