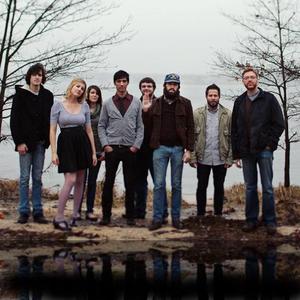 Music is an art form that is meant to speak to us beyond the literal. After spending years perfecting his craft, Singer/songwriter, Joseph Michelini decided to take his music to the next plane. Cutting his teeth in coffee houses in Toms River, NJ, Joseph began to introduce different elements, from acoustic bass, to banjo and cello. At that point, River City Extension was born; having the intention of writing orchestral indie rock, while introducing elements of Punk, Country, Folk, and World music.

River City Extension found itself going from a 3 piece acoustic act, and developing into a full 8-piece band. The band perfected a staggering and impressive live show, filled with high energy and angst. Finding themselves without a label they went into the studio and recorded their first D.I.Y. EP, Nautical Sabbatical in 2008. The band literally put the CDs together by hand prior to each show.

After finalizing their outfit, River City Extension hit the road, establishing a strong following in the Northeast region, making lasting impressions on audiences and promoters alike. The band created an organic element gradually developing them from a small local phenomenon, into a budding national act landing a slot on ARTSCAPE in Baltimore, MD directly supported Cake and Robert Randolph performing in front of 14,000 people as well as opening regionally for such acts as Squeeze and Nicole Atkins.

In late 2009 River City Extension hit the studio to record their first LP named ?The Unmistakable Man? . The band along with Eric Sanderson of the Brooklyn based band Pela, spent the next few months working in the studio perfecting each song. The plan was to release an album that would allow the listener to experience a story from start to finish, whatever their interpretation would be. ?The Unmistakable Man? delivers immense and precise orchestration, and is reflective of their energetic live show, this music will stand the test of time.

In early 2010 the band inked a deal with XOXO Records (Home to The Gaslight Anthem, Let Me Run, This Charming Man etc...). The band's new album has already started to get recognition, most recently appearing of the cover and featured in the East Coast Rocker. With the support of their label, friends and family, River City Extension plans to tour diligently across the US and UK.

Don't Let The Sun Go Down On Your Anger