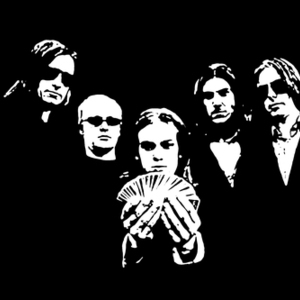 The puzzle Arabs In Aspic was first started in 1997, when part time guitarist Jostein Smeby and Tommy Ingebrigtsen became friends through their common love of Black Sabbath. Their obsession with this heavy rock band resulted in the guitar duo Plastic Fingers. After a year with the volume of the Snakeskin guitar turned up to ten, the duo decided it was about time to "hire" a drummer. Eskil Nyhus from Orkdal, the younger brother of a friend to the duo, made the choice easy. Anders Sprauten from Sprova was recruited as a vocalist, because of his rare, original voice.

After a year with the volume of the Snakeskin guitar turned up to ten, the duo decided it was about time to "hire" a drummer. Eskil Nyhus from Orkdal, the younger brother of a friend to the duo, made the choice easy. Anders Sprauten from Sprova was recruited as a vocalist, because of his rare, original voice. The cult band Electric Snowjogs was born!!!

The band mostly played covers of Sabbath, but they soon started to produce their own songs. Electric Snowjogs also had special interests in social ethics, and the song about an HIV-positive guy from Oppdal, "Prince Virus", became a classic tune that will live forever. At this time their interest for stoner-rock and especially British 70's-rock grew, and the band hired a bass player, Terje Nyhus.

In 1998 the band changed their name to Pilot. Pilot made numbers of riffs and had tons of ideas. In 1999 guitarist Jostein Smeby moved to Lillehammer to be a full time ski-jumper. The band was left with broken legs, but was not lifeless. Music was created here and there, and was interchanged through modern communication equipment, like tapes and telephone.

At this time the Pilot headquarter was in a barn in Orkdal (near Trondheim), where they came together a couple of times a year to exchange new ideas and even sometimes to have a party. Anders Sprauten was degraded, according to Darwin's "natural selection theory", from being the vocalist to being a booze importer and trickmaster. Jostein Smeby threw himself into the role as vocalist and guitarist.

In April 2002 there were big posters hanging all around Trondheim. It announced a Black Sabbath Tribute Concert at the "Rosendal Scene". The band enrolled the day before the show, and were given the privilege to open it. What a shame it would have been if Trondheim was to miss Norway's best Sabbath cover band.

Just before this gig the band changed their name: Arabs In Aspic was born! Inspiration came from King Crimson's legendary record "Larks Tongues In Aspic", from neck-breaking Arabic stunts six months earlier, and from a book about cricket history written by E.W. Swanton. The change of the name came when the band left the sinking stoner-rock ship to seek inspiration from immortal 60's and 70's rock music. Suddenly, inspiration sources were bands like King Crimson, Genesis, David Bowie and Uriah Heep instead of Kyuss, just to paint a picture.

In July 2002 Jostein Smeby moved back to Trondheim, and the whole band were reunited around the same brew. The band was constantly developing, and a lot of beautiful noise was about to come from these guys in the future.

Victim Of Your Father's Agony

Pictures In A Dream