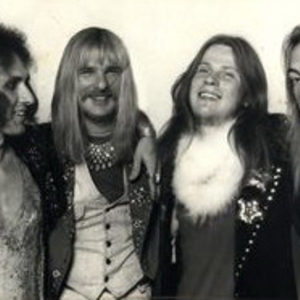 Neil Merryweather (born Robert Neilson Lillie on December 27, 1945 in Winnipeg, Manitoba) is a Canadian rock singer, bass player and songwriter. He has recorded and performed with musicians including Steve Miller, Dave Mason, Rick James and Wilson Pickett. The Just Us and The Tripp Merryweather began his career in Toronto during the early ?60s performing under the name Bobby Neilson. During 1964, he joined forces with Gary Muir & The Reflections, a local group comprising Muir (vocals), Ed Roth (organ), Bill Ross (guitar), Brian Hughes (bass) and Bob Ablack (drums).

The Just Us and The Tripp

Merryweather began his career in Toronto during the early ?60s performing under the name Bobby Neilson.

During 1964, he joined forces with Gary Muir & The Reflections, a local group comprising Muir (vocals), Ed Roth (organ), Bill Ross (guitar), Brian Hughes (bass) and Bob Ablack (drums). Neilson's arrival prompted the group to part from Muir and the band briefly changed their name to The Ookpiks (after a native-designed stuffed toy owl that was being promoted by the Canadian government). As it turned out that another group was already using that name, they briefly switched to The Sikusis (after yet another stuffed toy). After the Canadian government demanded payment for their name, they settled on The Just Us in early 1965.

In 1965, the group recorded its lone single, "I Don't Love You" c/w "I Can Tell", for the local Quality Records label. (Some copies list the group as The Ookpiks, some The Sikusis, and some The Just Us.) Soon afterwards, Hughes, Ross and new drummer Al Morrison left to take part in the formation of The Bossmen around singer David Clayton-Thomas).

Neilson, who now went by the name Neil Lillie, befriended ex-Mynah Birds singer Jimmy Livingston in Long and McQuade's music store where he worked in the backroom as an amp and guitar repairman and asked him to join a new line up of The Just Us. To complete the band, Lillie recruited former C. J. Feeney & The Spellbinders members Stan Endersby on guitar and Wayne Davis on bass.

In early 1966, the group recorded an album's worth of material at Arc Sound in Toronto, but disaster struck when the manager took the tapes and disappeared with them. Undeterred, The Just Us remained a popular local draw, regularly playing at Toronto clubs like the Hawk's Nest, the In Crowd and the Gogue Inn as well as local high schools.

In June 1966, Davis left to play with Bobby Kris & The Imperials and Lillie learned to play bass in two weeks to fill the spot. Around this time, an American duo with the same name appeared on the charts and the group was forced to adopt a new name, The Group Therapy, for its show at the Varsity Arena on June 22, supporting The Byrds. When another local group surfaced with an earlier claim to The Group Therapy name, the band adopted a new moniker, The Tripp, in September 1966.

The new group never got the opportunity to record, but did appear on the first episode of the Canadian Broadcasting Corporation's TV show ?The Sunday Show?. The band remained a regular fixture on the Toronto club scene throughout late 1966 and early 1967, and one of its most prestigious shows during this period was a performance at Maple Leaf Gardens on September 24, 1966 alongside the cream of Toronto's rock bands.

With its more experimental approach to performance, The Tripp began to perform at more colourful venues like Boris' Red Gas Room, the Flick and the Syndicate Club. Pianist Richard Bell from Ritchie Knight & The Mid-Knights briefly augmented the group in early 1967 but soon moved on to Ronnie Hawkins & The Hawks (and years later, Janis Joplin's backing groups and The Band).

Soon afterwards, Lillie left the group to take up an offer from singer Ricky James Matthews (later funk star Rick James) in a new version of The Mynah Birds. The band went to Motown studios in Detroit during August 1967 and recorded "It's My Time", a song written by James and Neil Young during the group's previous incarnation. The project was shelved when the band fell apart.

James and Lillie returned to Toronto to find new musicians. With James out of action for a few weeks, Lillie was introduced to guitarist Bruce Cockburn, formerly of the Esquires. The pair decided to go ahead without James, and recruited with former Bobby Kris & The Imperials members Marty Fisher and Gordon MacBain, who were playing at the Concord Tavern in Toronto at the time.

Signed to Harvey Glatt's management, the group recorded a number of unreleased tracks in Toronto, including Cockburn's ?Flying Circus?, ?She Wants To Know?, ?I'm Leaving You Out? and ?Mother? as well as Lillie's ?Last Hoorah? and ?Elephant Song? and Fisher and MacBain's ?Where Is All The Love?. At the same sessions, the band also recorded songs by Cockburn's former Children cohort, Bill Hawkins, such as ?Merry Go Round?, ?It's A Dirty Shame? and ?Little Bit Stoned?.

During late 1967, the band played at Le Hibou in Ottawa and the Riverboat in Toronto and opened for Wilson Pickett at the Capitol Theatre in Ottawa. The Flying Circus also drove to Motown Records but turned down an offer to record for the label after the members refused to give up their song-writing royalties.

Renamed Heather Merryweather after a song the band performed with lyrics by band friend, June Nelson, the group soon shortened it to simply Merryweather. In the summer of 1968, the band moved to Los Angeles but Livingston dropped out before the band signed to Capitol Records.

Shortly before the release of the band's eponymous debut, produced by John Gross, Lillie changed his name to Merryweather. The group's second (double album), ?Word of Mouth? (released in September 1969) was recorded in Los Angeles with the same basic line-up of Merryweather, Roth, Hall and Burt, plus Steve Miller, Barry Goldberg, Charlie Musselwhite, Dave Mason, Howard Roberts and Bobby Notkoff.

Although the album was reasonably successful, the group still fragmented, with Burt, Hall and Roth hooking up with Ricky James Matthews in a new group called Salt ?N' Pepper.

Merryweather flew back to Toronto to recruit replacements, then returned with them to record an interesting album for the important blues label, Kent in early 1970. The resulting album, credited to Merryweather, ex-Ugly Ducklings drummer Robin Boers, guitarist John Richardson from Nucleus (and before that Lords of London) and ex-49th Parallel member JJ Velker attracted only limited interest, as did a follow-up album for RCA, "Ivar Avenue Reunion", featuring the same basic group plus Goldberg, Musselwhite and Neil's new girlfriend, ex-CK Strong singer Lynn Carey.

Neil Merryweather and Lynn Carey, using a pool of musicians, recorded the "Vacuum Cleaner" LP for RCA, then came out with a more permanent unit, Mama Lion, which recorded two albums.