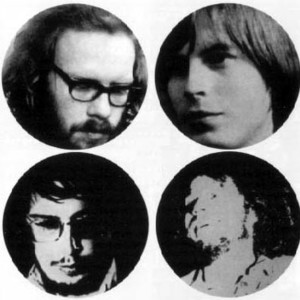 Os Mundi have been quoted as Berlin's first "rock big band" with a line-up that could swell to a dozen. Little-known really, Os Mundi were indeed an important part of the Berlin Krautrock underground with a history going back to the early-1960's. The roots of Os Mundi can be traced back to a beat group called the Safebreakers, who existed from 1962-1966, line-up: Christoph Busse (drums), Andreas Villain (bass), Lukas Dammer (guitar), Michael Wohrle (keyboards), with Holger Sieversen and Udo Arndt joining from the band Butterblume.

Safebreakers largely played Top 40 Hits, and the only document of any original music by them is in a film called "Madchen Madchen" directed by Roger Fritz. Circa 1967 Christoph Busse and Udo Arndt went on to form Orange Surprise, also featuring: David Kalkreuth (organ), Hartmut Hacki Seidel (bass) and Steve Jolliffe (flute, saxophone). Orange Surprise played original music and became involved in the arts scene. The band's initials OS gave rise to the name Os Mundi adopted in 1969 (or 1970, according to their own web pages). In their formative years Os Mundi also became friends of Agitation, sharing a rehearsal room at Paul-Linke-Ufer in Berlin-Kreuzberg. In these early days jam sessions took place with Manuel Gottsching (later of Ash Ra Tempel), Buddy Mandler, Ludolf Kuchenbuch (both from the original Os Mundi) and Michael Gunther (from Agitation), among others. Session tapes are said to exist. This association meant Os Mundi's music changed considerably.
Their debut LATIN MASS was notably inspired by 1960's American bands, and especially the Electric Prunes' MASS IN F MINOR, though from a very psychedelic Krautrock angle, with the Latin lyrics against a music more like a hybrid of Amon Duul II, Tangerine Dream's ELECTRONIC MEDITATION and Spooky Tooth. Intense and radical rock music indeed! Almost entirely different in style was 43 MINUTEN, reputedly showing Udo Arndt's liking for Chicago. If so, they twisted the inspiration in such a way, like Thirsty Moon, becoming a distinctly Teutonic rock-fusion, with all manner of invention and surprises.
Os Mundi apparently recorded a third album which remains unreleased. In their later years, other musicians, such as Ute Kannenberg (vocals, from Metropolis), Wolfram Jacob (percussion), Bernhard Arndt (piano) and Klaus Henrichs (alto saxophone, clarinet) passed through the band. By 1974 Os Mundi had changed into the ill-fated and short-lived Tequila Sunrise. Circa 1979-1980 Os Mundi reformed for some special concerts, of which a recording at the Quartier Latin in Berlin, 1979 exists. Udo Arndt is now a top recording engineer and producer, as is Christoph Busse.