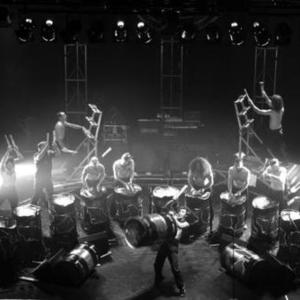 Les TAMBOURS DU BRONX were born in 1987 in Varennes-Vauzelles, parish of Nevers, Nievre, France. Their name comes from a Varennes-Vauzelles district called ? The Bronx ? because of its square patterned streets, and lines of identical dark houses. This district was primarily inhabited, by SNCF (French trains society) workers, where the first drums used by les TDB are from. Their first performance was a simple happening as part of the ? Nevers a Vif ? festival, in 1987 . What began like a joke between friends became the urban percussion's international reference.

20 years later, they've played through the U.S.A., Brasil, Arabics, Morocco, Tunisia, Greece, Reunion Island, Djibouti, Slovenia...and all around western Europe, on big events such as the bicentenary French revolution on the Champs-Elysee for Jean-Paul Goude defile in 1989, the opening of Johnny Hallyday 40 years career under the Eiffel Tower, a 6 week tour across the U.S.A. in 2000, the opening of Ko?n on Sziget Festival in Budapest in 2005, the Rockslide Festival for the opening of Jimmy Page and Robert Plant from Led Zeppelin in Denmark in 1992 and 1995, the French Stadium in 2006...
1000 concerts, 15000 squashed drums and 100000 split beetles stake the route of this atypical band out, who had more than 100 musicians in 20 years of life.

More than a rock band, this real musician company chose the autoproduction via the SARL TAMBOURS DU BRONX PRODUCTIONS. They are distributed by the independent French label Na?ve Records, who released their first DVD out in March 2006.

Les TAMBOURS DU BRONX have 17 musicians on stage surrounded by synthetic sounds, samples, and singing, all in time with the powerful rhythm. They built their reputation reviving drums from rough energetic music; a mixture of indus, afrobeat, drum'n'bass, hip-hop, rock, metal, hardcore and techno.
Born 20 years ago, les TAMBOURS DU BRONX , with their music and their know-how, have bewitched crowds and generations, because of a controlled and powerful rhythmical choreography.
With Repetitive gesture, gothic voices, and quirky dances, their drums create an apocalyptic universe, an ? end of the world ? music, with disconcerting accuracy. This subtle blend led them to become the universal reference in experimental percussions and industrial music.