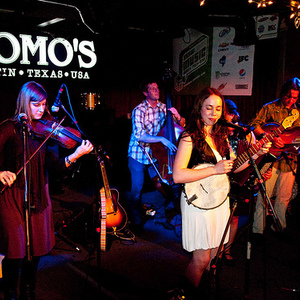 Black Prairie is an experimental bluegrass side project of three members of The Decemberists. The group formed in early 2007, bringing Decemberists members Jenny Conlee (vocals, accordian), Nate Query (bass, cello) and Chris Funk (vocals, bazouki, dobro, weissenborn) together with fellow Portland musicians Annalisa Tornfelt (vocals, fiddle) and Jon Neufeld (guitar, vocals). ?The first gatherings were a little daunting as we were all used to the traditional song form,? Funk said in a statement. ?It's been totally open-ended from day one, which is at times a little terrifying.?

Black Prairie's musical exploration will soon culminate in the early 2010 release of their debut, Feast of the Hunter's Moon, a 13-song collection largely featuring their own brand of bluegrass, plus two traditional tunes.

A Tear In The Eye Is A Wound In The Heart

Feast Of The Hunter's Moon