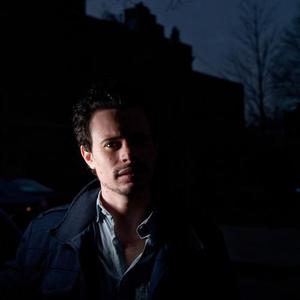 ?Nate Martinez, the man behind the lush and beautiful Thieving Irons, has made a record of rustic gorgeousness that makes one feel as if they were stooping down with those hands cupped, reaching for that fresh body of mountain water ? not tainted or tampered with ? and drawing it up to the mouth, feeling quenched as you've never been quenched before.?? -Daytrotter Nate Martinez's Statement on ?Behold, This Dreamer!?:

In some ways the story of this album began in a bookstore in Chicago when I found a book by William De La Mare titled 'Behold, This Dreamer!'. I was moved by the title and opened up the book to read more about it. I found that the subject matter mirrored topics that I had been exploring with a couple songs I had already written for the next album. The cover page reads: Of Reverie, Night, Sleep, Dream, Love-Dreams, Nightmare, Death, the Unconscious, the Imagination, Divination, the Artist, and Kindred Subjects. The topics I had been exploring in my songwriting were of ghosts, time- what it means, how we choose to spend it, and dreaming. The synchronicity of this moment had a pretty profound effect on me. I immediately bought the book but chose to never read it, only using it as a compass for my journey to complete this album. As an homage to the book and that moment I named an untitled song that I had been working on "Behold, This Dreamer! and immediately decided to name the album the same. I spent the next four months writing the remainder of the album and enlisting my close friends Dan Brantigan, Josh Kaufman and Andy Nauss to help record it.
?In many ways it feels like an album that has been in the making since I picked up an electric guitar at the age of 12, possibly even earlier.?
We spend our whole lives amassing various experiences... some traumatic, hopefully many more joyful. This album serves as a testament to my own.
After working for many years with other bands primarily playing guitar and other instruments I felt the need to find my own singing voice. I had always been writing and 4-tracking my own songs but I felt strong criticisms that my voice wasn't any good. So I quietly cultivated my singing while chasing a dream with my band at the time, Pela. Now I am confident saying that I have found a voice that is my own.
Behold, This Dreamer! isn't about tragedy, or about losing the girl, or small town drama. This is the story about making it out of that town, seeing the wide open road and asking yourself, what's next? Where do I want to go? Who do I want to be? ?
This is about listening to yourself, acting on intuition, and, most of all, awakening.

Brooklyn dream rockers, Thieving Irons, are proud to announce the release of their second LP, Behold, This Dreamer!, an ethereal, lyrical exploration of texture and sound from a group of seasoned and acclaimed musicians. The songs and themes of Behold, This Dreamer! are a nuanced study in perspective; offering, at once, a bird's-eye-view and telescopic lens. Rarely are the songs outright declarations, but rather multi-layered awakenings; true sonic translations of a sense of awe.? ?

Nate Martinez started Thieving Irons in late 2009 during the break-up of his band, Pela. The first album, This Midnight Hum released in 2010, was met with critical acclaim, named a ?blissed-out alt-country epic? by Gothamist and an album of ?beautifully textured indie folk, highlighted by Martinez's distinctive voice? by KEXP. There is a sense of relief about Behold, This Dreamer! a musical departure discovered in re-positioning toward a new, directed path to joy.

Martinez has been involved in familiar indie staples for over a decade. He has recorded and toured with The National and was a founding member of Pela. He also had a hand in the writing and production of Pela's last album, We Are Augustines' debut, ?Rise Ye Sunken Ships?.

He has been playing music with close friends, Josh Kaufman and Andy Nauss in several other projects for the past 15 years. They met while at college in New Paltz, NY and immediately discovered a musical kinship, starting their first band 2 weeks into freshman year. Martinez met Dan Brantigan through a mutual friend at a coffee shop where Martinez worked in 2005. They immediately hit it off and Martinez asked Brantigan to play trumpet with Pela for their shows in New York. This planted the seed of collaboration between Brantigan and Martinez.

In the winter of 2011 Martinez set off to begin writing the next album in between a couple tours playing guitar for Alexi Murdoch. While in Chicago he walked into an old bookstore seeking inspiration. Inspiration he found- while combing the aisles he stumbled on a book entitled 'Behold, This Dreamer!' which ultimately became the name of the album. Throughout the spring and summer of 2011 Martinez finished writing the songs for the album and recruited Brantigan, Kaufman, and Nauss to join him for the recording. During this time Martinez met D. James Goodwin, whose in-studio talents would prove to be a perfect marriage for the songs and the group. The album was recorded mostly live in Woodstock, NY at D.James Goodwin's Isokon Studios with Martinez and Kaufman producing and D.James Goodwin engineering, mixing and mastering.

?Thieving Irons is a collective of close friends navigating together through dense sonic terrain with Martinez's songs as the guides. Each one providing a sense of comfort while also implying that there is no safety net. We're all in a free fall so we might as well wake up and enjoy the ride.