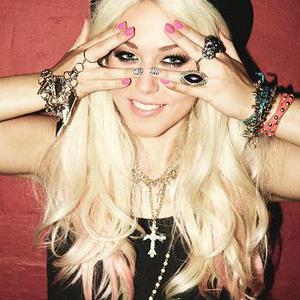 Amelia Lily Oliver (born October 16, 1994 in Middlesbrough) is a British singer and best known for her appearance in Britains biggest talent show, "The X Factor". Lily auditioned for the 2011 edition and went on to reach the grand final where she was placed third behind Marcus Collins and eventual winner, Little Mix. The You Bring Me Joy Songfacts reports that Amelia signed a 3-album record deal with Sony subsidiary Xenomania and released "You Bring Me Joy" as her debut single on August 26, 2012 in the UK.

Lily auditioned for the eight UK series with the Janis Joplin classic "Piece of My Heart" and got put through to bootcamp. Eventually, she made it through to the Judges' houses stage performing a cover of the Katy Perry hit "E.T." and her version of Lady Gaga's "You And I" - At this point in the competition, Lily was considered a strong favorite to win the 2011 series.

On October 9th 2011 (the first live show), Lily performed the Chris Cornell inspired "Billie Jean" (originally made famous by Michael Jackson) - Mentor Kelly Rowland had to make the 'difficult' decision and eliminate one of her four girls. It came down between Lily and Sophie Habibis. After much hesitation, Lily became the first from the 'girls' category to be eliminated from the live shows (there was no public vote in the inaugural live show).

From the 10th until the 12th November, the public voted for one act from the initial four eliminated to replace the expelled Frankie Cocozza . In week six, Amelia Lily was voted back into the competition after winning 48% of the vote. That week she sang the Queen classic "The Show Must Go On" and received rave reviews from the panel and public alike. After the vote was cast, Lily went on to beat the other six finalists by receiving the highest number of votes (27.4%). At this point, the bookies had her as the favorite to win.

In week seven, Lily performed a version of the Aretha Franklin hit "Think" - Despite good reviews from the judges, Lily received 11,3% of the public vote and landed in the final showdown with Craig Colton. The judges vote went to 'deadlock' and Lily was saved based on having more votes than Colton.

In week eight she performed the T'Pau classic "China In Your Hand" and the Kelly Clarkson monster-hit "Since U Been Gone" - Lily went on the receive the highest number of votes by receiving 23.8% of the public vote cast.

In week nine (the final five stage), Lily performed the motown classic "Ain't No Mountain High Enough" for her first song. Her second song was a beautiful version of the Avril Lavigne hit "I'm With You" - Lily went on the receive 23.8% of the public vote and made it through to the final - Thus making her the last female soloist in the competition. (to much irony considering she was originally eliminated as the first girl)

The first part of the grand finale took place on Saturday 10th December 2011. Lily performed the Christina Aguilera hit "Ain't No Other Man". She also performed a duet with her mentor Kelly Rowland of the classic "River Deep, Mountain High" - the collaboration was well recived. Later on that evening, Lily was revealed to have recived the lowest number of votes (26.5%) and was placed as 2011's third place finalist.

You Bring Me Joy (CDS)