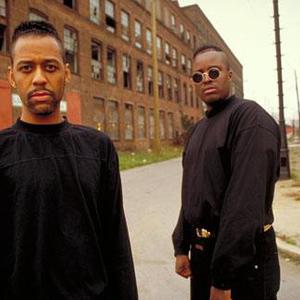 What happens when you take an accomplished dancer who's musically trained and unleash him in a studio? Well, if the conditions are right, you might get Aux 88. But not overnight... Tommy Hamilton had always been musically inclined. From the age of 5 he had played with drums, so the concept of the beat and rhythm were with him early on. While he was in high school in the early 80's, influenced by his sister, he became a dancer.

Tom Tom, as he was to be known, became a member of a number of different dance groups, from the Cosmic Swingers, the Motor City Poppers, to the Devo Dancers. Things were going good, but Tom was looking for more. It was through the dance scene that Tom met up with BJ, another dancer who was looking for more. Together, in 1985 they formed Regime.

Regime was a live band that performed inspired cover versions of Cybotron and Model 500 tracks. It wasn't so much that they were trying to break new ground by playing live--they knew no other way. MIDI and sequencers were virtually unheard of, especially to two high schoolers who simply had a love for the music. Though Regime soon broke up, Tom was sold on the concept of live electronic dance music.

Finding a kindred soul in Keith Tucker, who had been DJing as DJ K-1, they formed RX7. Not content to only do covers, RX7 also featured original tracks by both Tom and Tucker. They dominated a number of area festivals and for a time, there was even talk of them acting as tour support for techno godfather Juan Atkins' Cybotron and Model 500. In the end, nothing came of that, and, after about two years, RX7 split up to go their separate ways. The split was less permanent than either expected. In the time that followed Tom began getting even deeper in keyboards and experimenting with other styles of music such as jazz and R&B.

He also spent time exploring his percussive roots, playing in what he termed "the acoustic world." In fall of 1992, Tom Tom and Tucker reunited and found that their time apart had done them both good. With a renewed sense of purpose, they put together a fusion of styles and added Anthony Horton and vocalist Andrea Gilmore to become...Sight Beyond Sight. SBS was soon signed to 430 West Records. While SBS enjoyed a degree of success, Tom Tom and Tucker made the decision to continue with the bass heavy techno they had began with some time earlier. 1993 saw this return to their roots as the birth of Aux 88.

As Aux took off, SBS was put on hold and the other members went to work on individual projects. Then, as if to acknowledge the move, Aux 88 released "My A.U.X. Mind" which went on to become a Detroit classic. Putting the icing on the cake, Aux 88 joined up with other area musicians to perform with Juan Atkins as Model 500 on the 10th anniversary of his label, Metroplex. However, the evolution of Aux 88 was not over. In 1995, desiring to do more experimental tracks, Tucker went solo. Tom didn't miss a beat. Reuniting with BJ, Aux 88 went on to release the full length CD, "Man or Machine."

Direct BeatTouring both the US and Europe, and with video airplay on MTV's AMP, Aux 88 began the process of turning on the planet on to their techno/bass/dance fusion. Still, it was not enough. Aux had already made a name for itself via live performances. As individuals who had been deep in the scene long before recording music, they knew they had to take it to the next level. Acting on a tip from another recording artist on 430 West, Octave One, Tom met up with the young Di'jital. Already established in the Detroit underground scene, Di'jital joined the Aux 88 live show. As Aux plays live, Di'jital mixes an array of music.

The effect is that of an electrified old school hip hop show. It isn't accidental. Aux 88 is one of the few who remember that techno has its roots in the hip hop of pioneers like Afrika Bambaataa, Planet Patrol and Newcleus. Rounding out the show was the addition of two female dancers-turned-recording-artists who call themselves X-ILE. If anyone mistakes their live show as a scaled down electronic hip hop oriented Parliament show, well, you're not too far off the mark. After the success of "Man or Machine," BJ left to explore other musical realms while Tom Tom went on to record "Xeo-Genetic," the latest Aux offering on Direct Beat records.

Meaning "derived from another species," xeogenetic is an accurate description of what Aux 88 has stood for from the beginning. Hip hop, techno, Miami bass, trip hop and funk all have legitimate claim to the sound that is Aux 88, which is something different altogether. So the question may be asked, "Who exactly is Aux 88? What is their sound?" As Tom Tom says, laughing from his base of operations in Detroit, "Aux isn't looking to fit any one description. Aux is looking to make people dance by any means necessary. And while Aux has a definite sound, easy to identify, Aux is *never* the same group twice!"