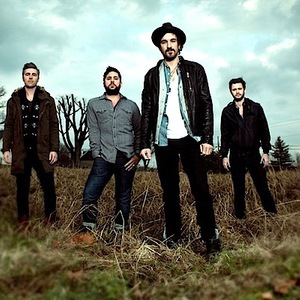 Rhett Walker, born and raised in the South, is not like any rising Christian musician you have met before or will meet again soon. The outspoken 25-year-old son of a preacher was born and raised around the South. When he moved away from his hometown at 16, he started hanging out with the rough crown and got expelled from school, so his parents sent him to a Christian school. When he was 17 at that school, he met a girl, then found out she was pregnant. He stepped up to the challenge and sat down with his soon-to-be wife to figure out how to change their lives.

Rhett and April got married. He rededicated his life to God, and she accepted Jesus for the first time. He got a diploma, and she made their $300-per-month apartment into a home. They welcomed a daughter, Rileigh, and became active in church where Walker began leading worship.

As they matured in faith and expanded their family, a growing number of opportunities for Rhett to lead worship at other churches and on college campuses helped him let go of his construction and factory work. It was a dream come true. After leading worship nearby his hometown for a while, they moved six hours away for him to take a conference-based worship leader position. After that, the next stop was Nashville, where Rhett Walker Band and the grace-themed, movement-inspiring songs for Come To The River would begin to take shape.

Rhett's goal was to "write music that isn't really congregational worship but still inspires a movement that champions what grace really is." Like his life, his songs are a gritty and graceful open book, direct statements thickened with Southern rock influences?Third Day, Black Crowes, Lynyrd Skynyrd?and hints of praise, even poetry.

It wasn't long before his music won independent songwriter contests and gained the attention of Provident Label Group (Third Day, Casting Crowns), who signed Rhett to essential records knowing that his no-bones Christian message would reach the heart of the industry as well as the rough edges. ?There's just nothing we can do without grace; we're all dirty, messed up people, but Christ still loves us,? he says of the drive behind Come To The River. ?So there's two things we must do. One: rejoice, because now we have a purpose on this earth?to share that grace with others. Two: take up the calling. You can't just take that love and not tell the story that goes with it.?

?Gonna Be Alright? opens the set with a wall of electric guitars that soon falls back to a single acoustic, making space to highlight Rhett's instantly appealing Mac Powell-meets-Mark Hall voice. The title track follows with a cool country-folk stomp no one would see coming?a brand of wild and free worship that celebrates God's provision with around-the-campfire abandon.

To get the full sense of Rhett Walker Band, listen to the soaring testimony, ?When Mercy Found Me,? a song that radio could get used to fast across every format from adult contemporary to rock. ?Get Up Get Out? is his status quo-buster; an I'm-going-with-or-without-you call to tell the world what Jesus did. That isn't to say Walker lacks compassion for people who don't think like him?it's quite the opposite in fact on the album's most defining cut, ?Brother,? an introspective worship duet with All Sons & Daughters' David Leonard. Built upon a mournful steel guitar and escalating toward eternal hope, they sing about how we're all beggars and thieves in need of the very same grace. This is one of the best singers in the christian music world

Here's To The Ones (Deluxe Edition)

Come To The River