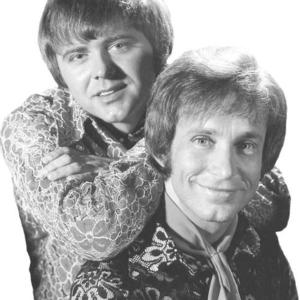 Tommy Boyce (born Sidney Thomas Boyce, September 29, 1939 ? November 23, 1994) and Bobby Hart (born Robert Luke Harshman, February 19, 1939, Phoenix, Arizona) were a prolific songwriting duo, best known for the songs they wrote for The Monkees. Hart's father was a church minister. Hart served in the Army after leaving high school, and on discharge travelled to Los Angeles seeking a career as a singer. Boyce was separately pursuing a career as a singer.

Hart's father was a church minister. Hart served in the Army after leaving high school, and on discharge travelled to Los Angeles seeking a career as a singer. Boyce was separately pursuing a career as a singer. After being rejected numerous times, Boyce took his father's suggestion to write a song called "Be My Guest" for rock and roll star Fats Domino. He waited six hours at Domino's hotel room to present him with the demo, and got Domino to promise to listen to the song. The song hit #8 in the US and #11 in the UK, becoming Domino's biggest hit there in serveral years, and sold over a million copies. Boyce met Hart in 1959, and the following year played guitar on Hart's single "Girl In The Window," which flopped, but marked the first time he used the name Bobby Hart, since his manager shortened it to fit the label.

Their partnership made a breakthrough with a song recorded by Chubby Checker, "Lazy Elsie Molly", in 1964. They went on to write hits for Jay & the Americans ("Come a Little Bit Closer"), Paul Revere and the Raiders ("(I'm Not Your) Steppin' Stone") and The Leaves ("Words"). The latter two songs provided the Monkees with hit B-sides in 1967. The duo also wrote the theme song to the daytime soap Days of Our Lives. At one point in this period, Hart also co-wrote "Hurt So Bad" for Little Anthony & the Imperials with Teddy Randazzo and his regular songwriting partner, Bobby Weinstein.

In late 1965, they wrote, produced and performed the soundtrack to the pilot of The Monkees, including singing lead vocals (which were later replaced, once the show was cast). In 1966, despite some conflicts with Don Kirshner, who was the show's musical supervisor, they were retained in substantially the same role. It was Boyce and Hart who wrote, produced and recorded (with the help of their band, the Candy Store Prophets) backing tracks for a large portion of the first season of The Monkees, and the band's accompanying debut album.

The Monkees themselves re-recorded their vocals over Boyce and Hart's when it came time to release the songs, including both "(Theme from) The Monkees" and "Last Train to Clarksville," the latter of which was a huge hit. Kirshner suddenly relieved Boyce and Hart as producers, by claiming they were using studio time booked for Monkees songs to record tracks for their own solo project.

After their departure from the Monkees, and the negative publicity that erupted when word got out that the band hadn't played the instruments on their early records, Boyce and Hart were unsure how the Monkees felt about them personally. Attending one of their concerts, though, the duo were spotted in the audience, and singer Davy Jones invited them onstage, to introduce them: "These are the fellows who wrote our great hits ? Tommy and Bobby!" Every original Monkees album (except for the Head soundtrack) included Boyce and Hart songs.

While working with The Monkees, Boyce and Hart embarked on a successful career as recording artists in their own right, releasing three albums on A&M Records: Test Patterns, I Wonder What She's Doing Tonight, and It's All Happening on the Inside (released in Canada as Which One's Boyce and Which One's Hart?). The duo also had several hit singles; the most well-known of these were "Out and About," "I Wonder What She's Doing Tonight," "Alice Long" and "I'll Blow You A Kiss in the Wind", which they performed on the television show Bewitched. They also appeared on other TV shows including The Flying Nun and I Dream of Jeannie ("Jeannie the Hip Hippie").

They also were involved with producing music for motion pictures for Columbia Pictures, including two Matt Helm movies (The Ambushers and Murderer's Row), Winter A-Go-Go and Where Angels Go, Trouble Follows.

In 1971 a sitcom named Getting Together appeared on ABC-TV, starring Bobby Sherman and Wes Stern as two struggling songwriters, who were friends of The Partridge Family (and were introduced on their show). The series was reportedly based loosely on Boyce and Hart's partnership. At this point, they decided to work on various solo projects.

In the mid-1970s, Boyce and Hart reunited with Davy Jones and Micky Dolenz, performing the songs Boyce and Hart had written for The Monkees a decade before. Legally prohibited from using the Monkees name, they called themselves Dolenz, Jones, Boyce & Hart. The group toured amusement parks and other venues throughout America, Japan and other locations from July 4th, 1975 to early 1977, also becoming the first American band to play in Thailand. Signed to Capitol Records by Al Coury, the group released an album of new material in 1976. (A live album was also recorded in Japan, but was not released in the United States until the mid-1990s.) The tours coincided with the syndication of the Monkees TV series, and helped boost sales of Arista's The Monkees Greatest Hits.

Dolenz, Jones, Boyce and Hart also starred in their own TV special called The Great Golden Hits of the Monkees Show, which appeared in syndication. It featured a medley of other Boyce and Hart songs, as well as the songs they had produced for the Monkees. Strangely, it did not include any songs from their new album.

In 1979 Boyce formed his own band, called The Tommy Band, and toured the UK as support to Andrew Matheson (ex-Hollywood Brats). The tour was largely ignored by the public especially in Middlesbrough where reportedly just one person paid to watch the show. Boyce and Hart reunited during the 1980s resurgence of the Monkees, and performed live.

After a stint living in the UK, Tommy Boyce returned to live in Nashville, Tennessee, where he struggled with depression, and later suffered a brain aneurysm. In 1994, Boyce died of a self-inflicted gunshot wound.

Hart was nominated for an Oscar in 1983 for his song "Over You", written for the film Tender Mercies.

According to the Rolling Stone Encyclopedia of Rock & Roll, Boyce and Hart wrote more than 300 songs, and sold more than 42 million records as a partnership.