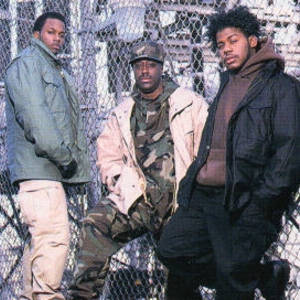 Aside from one well-received single in 1995,Trends Of Culture more or less disappeared after releasing a first-rate piece of music in the form of their 1993 album, Trendz. The LP makes an inferior, but worthy, companion piece to contemporaneous releases like Enter The Wu-Tang and Black Moon's Enta Da Stage. Trendz is a dark yet lively record that playfully glorifies a mildly sociopathic lifestyle.

Emcee Nastee is the standout member of the trio, combining an uninhibited musical delivery with the braggadocio of Lord Finesse. The other members, Grapevine and M.O.L., also hold their own as rappers and while they may not be as compelling or vocally gifted as Nastee, they each have several moments of great rhyming. M.O.L., the album's primary producer, uses clever breaks and samples from the world of 70's jazz and 80's R&B to create a mood that is both melodic and rugged. The songs on Trendz display a variety of flavors without making the album feel disjointed, and as a result things stay interesting throughout, from ?Mad Flavor Mad Styles,? a funky party record, to the hazy and bleak ?Crotch Ripper/Mad Speaker.?

The group's success comes from carefully mastering reigning rap trends and drawing upon great past influences?a Das Efx flavor can be detected in the deliveries of all three emcees, and Grapevine is at times difficult to distinguish from Grand Puba. But they are far from biters, as they show an equal appreciation for not-so-trendy music as well, quoting Gershwin and leaving the quirky keyboard solo from Roy Ayers' ?Everybody Loves The Sunshine? intact in ?Valley Of The Skinz.? Though listeners who become immersed in this specific genre of music (early-to-mid-nineties New York City hip-hop) may not agree, Trends Of Culture lack the lyrical originality needed in order to be considered as memorable as their better known peers, but that doesn't mean that their music isn't enjoyable. Trendz is a well-crafted album that dark but not morose, cheeky without being obnoxious, and grimy without being overly rowdy. With no filler, effective pacing, and most importantly, excellent songs such as ?Fuck What Ya Heard? and the lead single ?Off & On,? it is hard to listen to Trendz without wondering why these three were not given the opportunity to release a proper follow-up.