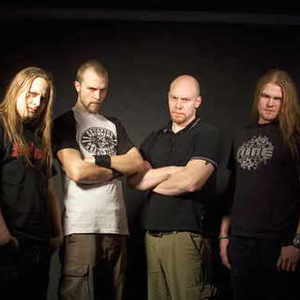 The foundation of 2 Ton Predator was laid in 1993 when Tobbe and Mogge founded the band Wedge. MaZZa and Matte soon joined them, and with the line-up complete the band began writing songs, doing demos, and looking for a deal. The style back then was laid back metal sort of in the vein of Alice In Chains. The band's first demo from ?93 was done in the Swedish Gorysound Studio with Dan Swan? (Edge Of Sanity) behind the knobs, but despite Wedge's cooperation with Dan Swan?, they didn't manage to catch the interest of any labels so new recordings were done and more demos sent out.

Despite their many efforts the band had to face the fact that getting a deal is not the easiest thing in the world and to top it off - In 1996 the band's singer Mogge had to do eight months in prison. Ironically exactly at that time the band actually got a deal with the TCB-Agency, and thus their continued rehearsing obviously had to be done without the presence of a singer and with a lot of rehearsal tapes being sent to Mogge's new ?home? in order to keep him updated on the development of the band. Evidently even eight months in prison pass and Mogge finally got released. At that time everybody thought that Wedge were to record their first full length for the TCB-Agency, but once again the record business displayed some of its more unpredictable sides. Here's what happened according to Matte: ?The manager from TCB split leaving behind him numerous of unpaid bills, his employees in deep shit and us very disillusioned and to put it mildly - fuckin' disappointed!!! We then knew it was time for a change.?

So Wedge decided to change their name to 2 Ton Predator and start from scratch. After all there were already two other bands called Wedge along with an American bakery. And who wants to be associated with a bakery anyway? What's the reason for naming themselves 2 Ton Predator you might ask? ?All four of us are very fascinated with large animal predators such as the great white shark? says Matte. ?I guess that's what inspired us to come up with that name. Also I think that the name 2 Ton Predator very well reflects our style of playing. You just know when you hear the name 2 Ton Predator that it isn't just some wimpy load of shit.? A new demo ?Burned ?98? was recorded and that tape managed to catch the interest of Diehard. A deal was made and the Danish producer Tue Madsen (Grope) was transported to the Soundlab Studios in ?-rebro, Sweden, where he produced the 2 Ton Predator debut full length ?In The Shallow Waters?.

The musical inspirations for the members of 2 Ton Predator derive from a lot of different bands. ?First of all?, says Matte, ?I guess we have to blame Mr. Hetfield and Mr. Araya for playing music in the first place, and even though we obviously donut have a certain band or person in mind when writing new songs we all very much like the great bands of the 80s such as Kiss, Maiden etc., but we also get into the newer stuff like C.O.C., Crowbar, Pantera, At The Gates just to mention a few. Once in a while we even get into ?MTV music? Yes! Crucify us if you like.?

Everyday life in 2 Ton Predator's world is occupied with working shit jobs, lifting weights and rehearsing, and oh yeah lets not forget the weekends which are spent partying as hard as possible. 2 Ton Predator's hunting ground is in the territory between Crowbar, Pantera and Down and their style is backed by strong musicianship, clever song writing, and fueled by an energy and will, which is well above all. ?Demon Dealer? will absorb you into a riff-filled short fused fierce style of metal, leaving bite marks scarring you for life.
The band is:

In The Shallow Waters