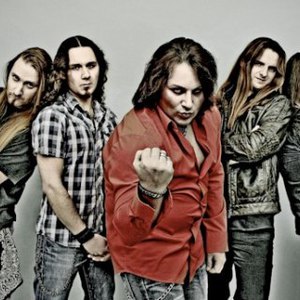 DOWNSPIRIT was originally formed in 2009 by SYMPHORCE/Ex-FREEDOM CALL guitarist C?dric "Cede" Dupont in order to fulfill his longtime dream to form a band dedicated to the combination of blues and metal music. The band also consists of vocal-talent Steffen Lauth, Axel ?Aki? Reissmann (rhythm.guit./?PUMP?), as well as Sven Rakowitz on bass and Sebastian Dunkel on drums, who complete the line-up with a blasting feel of rhythm and groove. DOWNSPIRIT's main goal is to play live as much as possible - from the smallest club in your neighborhood to the biggest stadiums in the world.

Whatever might cross their paths in the long-term future - this band is about to crank your stereos, rock your house and turn it all into one big rock party! Located in Stuttgart/Germany, DOWNSPIRIT have recently been putting finishing touches to their sensational debut album "POINT OF ORIGIN", which is going to be released in Europe on 23rd July 2010 and on 20th August 2010 in the US and Canada via Metalville.
Blending old blues roots with a modern, downtuned guitar-feel, their songs are a mixture of typical bluesy 80's hard rock and a contemporary metal sound, which also includes some Rock/Pop influences here and there. "POINT OF ORIGIN" is not just an album with excellent songs on it, furthermore it is a SOUND EXPERIENCE that catches the attention of its listeners from the first note to the last beat! The melancholic feeling of blues music combined with the power of Heavy Metal riffs and strong melodies, a band including well known and talented musicians who came together to deliver quality sounding music with power and passion: THAT'S DOWNSPIRIT!