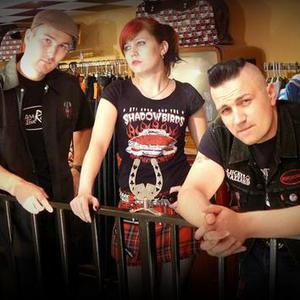 The Silver Shine formed in Budapest on the summer of 2004 with the main goal to take some pleasing minutes/hours/years for the fans of psychobilly, punk and rockabilly music. All the members had experience in active bands before they formed The Silver Shine. The final line-up is: Krista Kat (double bass), Ati Edge (guitar/vocals) and Rolee Shine (drums). They recorded their first EP in February 2005 and it came out as 7" on Commitment Records in The Netherlands during the summer of 2005. The debut EP contains 6 songs and it shows you the punk side of the band.

They recorded their first EP in February 2005 and it came out as 7" on Commitment Records in The Netherlands during the summer of 2005. The debut EP contains 6 songs and it shows you the punk side of the band. After a couple of bigger shows the band went to studio in November 2005 to record their first full-length. Their first full-length album titled "Nightmare" came out on CD by the German label called Crazy Love Records. This album includes 14 songs and follows the psychobilly path including punkabilly roots. The gigs/gig-invitations multiplied after their debut album and the band went to stage with bands like Mad Sin, The Meteors, Rezurex, Klingonz, The Peacocks, Phantom Rockers, Deadline, etc, in Hungary and in the abroad. The first European-tour of The Silver Shine had happened in the September of 2006 as "Nightmare Tour" and the guys showed the Hungarian derring-do in Spain, France and Germany. The welcome of the band was very good and they have got very good criticism everywhere.

After this tour their first double bassist changed to Frenk Set and after some hard months in rehearsal room the band recorded their second full-length album. It came out also by the meanest psychobilly label named Crazy Love Records on CD and LP titled "Don't Trust The Girl With The Chainsaw". The record contains 15 songs, a Hungarian language cover song among other tunes and a wild psychobilly version of "Mercy" originally written by the famous American duo called Collins Kids from the fifties.

After the studio recordings the band went to a west-bound tour again and they made it in Czech Republic, Germany and The Netherlands. In the May of 2007 The Silver Shine was the first outlandish band in the mother country of the legend Count Drakula to show to the Romanian ghouls what the hell is the psychobilly. Since then they played with The Peacocks in Austria and Mad Sin again in Zalaegerszeg. In October, 2007, Set left the band and Krista Kat joined the band as double bassist. A female double bassist first time in the history of the band. She's got power more than enough to punch you in the face with her slap attack! They've got a couple of shows with her in Austria, Italy and we played at Moonlight Mayhem Festival in Prague at the end of 2007.

At the beginning of 2008 they toured in Hungary with a Hungarian punk band named Semmi Komoly and went to a European tour again. They visited Denmark, Germany and Switzerland and after the tour they played one show at Ukrabilly Bang Festival in Kiev, Ukraine, and some shows in Czech Republic. One of the meanest show for the band happened in May, when they played at Psychomania Rumble no.2 at Potsdam, Germany.

In The Middle Of Nowhere