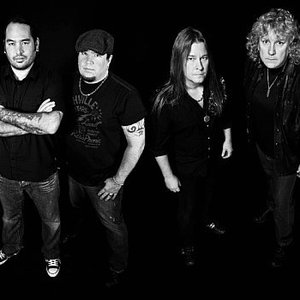 Glen Drover (born May 25, 1969) is a heavy metal guitarist from Missisauga, Ontario, Canada. He currently resides in Mississauga Ontario. Drover is best known as the former lead guitarist in Megadeth and King Diamond, as well as his own band Eidolon, along with his brother Shawn Drover. Glen Drover began playing guitar as a child, and was joined at age 10 by his brother Shawn on drums. Influenced by Tony MacAlpine, Al Di Meola, Randy Rhoads, Greg Howe, Michael Romeo, George Lynch, Warren DeMartini and David Gilmour...

In 1998, Drover joined King Diamond, and appeared on the House of God album.

In October 2004, Drover joined thrash metal band Megadeth, bringing along his brother Shawn. Following an extensive world tour, Drover contributed to Megadeth's 2007 release, United Abominations as the lead guitarist and with co-writing credits for one song. While busy recording that album, Drover also cut a guest guitar solo for the track "Emotional Coma" (featured on the album Emotional Coma) by Swedish metal group Lion's Share. Drover recorded his solo at home in Canada, and sent the music file to the band.

In January 2008 Glen Drover left Megadeth to focus on family life; the constant touring was starting to have a negative effect on him. His last show with Megadeth was on November 18, 2007 in Brisbane, Australia. Commenting on leaving the band, Drover said "I am aware of the rumors that I left Megadeth to focus on family life and my family life has always been my priority. In the end, I was unhappy with the situation, which magnified me wanting to spend more time with my family and realizing that it's time for me to move on to the next chapter in my musical career, I have a lot of great memories and met a ton of great people along the way, both fans and people in the industry."

Glen is now collaborating with Stephan Forte of the band Adagio on a 10 track instrumental CD. Recently he finished working on the album entitled Metalusion and was recorded sporadically over a 2-plus-year period, It will be released on April 5, 2011.

On the 22 Oct 2008 Testament announced that they have recruited guitarist Glen Drover to fill in on their upcoming Mexican tour dates with Judas Priest, Due to Alex Skolnick's prior commitment to the Trans-Siberian Orchestra. Also in March 2010, during the time of him trying to finally finish his album, Glen Drover will be playing with Testament on the upcoming Megadeth, Testament, Exodus tour In the US and Canada, due to Alex Skolnick being away again during this time.