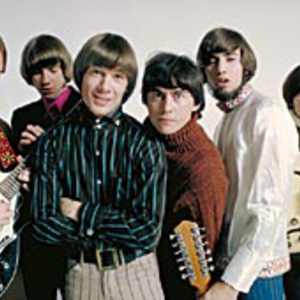 Originally known as The Travelers, this Chicago-based act were clearly influenced by the British music invasion. Indeed, it was their cover version of Sugar And Spice, which had given The Searchers a big U.K. hit back in 1963, that attracted the attention of Columbia, leading them to take over the distribution of their 45. A later cover of Lennon-McCartney's You're Gonna Lose That Girl, which was probably intended as the follow-up, got lost somewhere in their switch from Destination to Columbia and was only aired much later when Happy Tiger included it on their Early Chicago compilation.

After signing to Columbia, they concentrated on putting out their first album, which had a considerable Byrds influence and some good original compositions, notably Jim Fair's Ben Franklin's Almanac. It also contained some well done cover versions of songs like Hey Joe, If I Needed Someone, We Gotta Get Out Of This Place, We'll Meet Again and She Don't Care About Time. It peaked at No. 192 in the U.S. album charts.

Further 45s followed: another Jim Fair composition from their debut album, I Wanna Meet You, which became a minor hit, and Georgia, which was even less successful.

Gerry Stone was drafted and further line-up changes took place before they began work on a second album. The result was rather bland but a marked advance in terms of production and harmony. Commercially, it was more successful than their first, climbing to No. 156. Meanwhile they enjoyed a minor 45 hit with It Could Be We Are In Love - one of their more inventive singles. Like the follow-up, Up On The Roof, it made the No. 85 spot.

Their third album, Synthesis had strong material and lavish instrumentation but could only manage No. 184 in the album charts. For this release, Dave Carter joined from the recently disbanded Saturday's Children.

In 1969, Carter, Kerley, and Dawson joined with members of Aorta to do an album of Navy public service spots under the moniker Aorta/Cryin' Shames Ensemble. The following year the band called it quits.
Isaac Guillory gave it a go solo and issued at least one 45 (Sidewalks Of America/Steamboat on Atlantic (UK 10442) (UK #) in 1974) and an LP, Isaac Guilloly (Atlantic SD 7307) 1974, in the folky 'singer-songwriter' mould. In the nineties Jim Pilster, who got his nickname because he had a hook instead of a left hand, was still singing for a re-formed The Cryan Shames, for which Tom Doody also makes occasional appearances.

A Scratch In The Sky (Remastered) (Bonus Tracks)