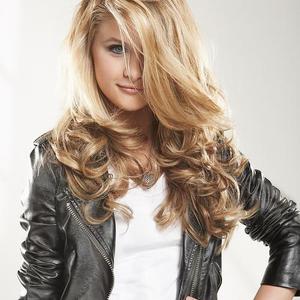 Savannah Outen was born on October 14th, 1992. At an early age, Savannah started to perform. She was asked to sing the "National Anthem" at various sporting events, including Seattle SuperSonics, Oakland Raiders, Los Angeles Dodgers, and Anaheim Angels. At the age of 12, Savannah made it to the finals of "America's Best New Talent". In March 2007, she started to post YouTube videos of herself singing popular cover songs of that time, in front of her white closet doors which have now become her trademark.

In March 2007, she started to post YouTube videos of herself singing popular cover songs of that time, in front of her white closet doors which have now become her trademark. The first video she posted was of her singing "Listen" by Beyonce, from the movie Dreamgirls. Soon after, viewers began requesting songs for Savannah to post. She covered everything from Miley Cyrus's "7 things" to "Somewhere Over the Rainbow" from the Wizards of
Oz.

In the fall of 2007, Savannah recorded the first song ?Goodbyes? that she wrote during middle school graduation about her best friend. "Goodbyes" was Savannah's debut single on Radio Disney, and it stayed on Radio Disney's Top 30 Countdown for 18 weeks and peeked at #5. This still holds the record for the highest charted song by an unsigned artist.
"Goodbyes" made it to Radio Disney's Top 10 Summer Songs and Top 50 Songs of 2008. For 2 months that fall, Savannah was the opening act of Nat & Alex Wolff's tour.

During 2009 Savannah released two more singles on Radio Disney, "If You Only Knew" and "Fighting For My Life". She also participated in a project for Zoovolution, where she narrated an audio book called "Fur Trade" and recorded a song to help raise awareness about cruelty against animals. She recorded a song for the ?Tinkerbell and the Lost
Treasure Soundtrack?, as well as a cover of "Little Wonders" from ?Meet the Robinsons, for the Disney Mania 7 released in 2010.

In 2010 she performed her new single, ?Be Original?, on the Coca Cola Red Carpet Pre Show for the American Music Awards. This song received heavy rotation on Radio Disney reaching #13 on the Top 30 Countdown and ended up being one of the top 50 songs of 2010. Savannah was voted by twitter entries to be one of the top 10 artist breakout artist of 2011.