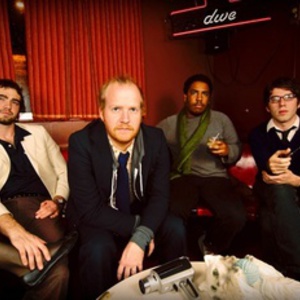 Seth Kaufman, the unsuspecting man behind the band Floating Action, lives in Asheville, North Carolina, and maybe more than it usually would, that piece of biographical information about him says a lot. He lives there, in one of the prettiest cities in this great and great big old country, cuddled up against the Blue Ridge Mountains, and he takes advantage of all of its splendors, it seems. He greedily and voraciously fills his available time with hiking and wiffle ball games, picnics and other outdoorsy activities that no matter how much any jerk will want to argue with you...

Kaufman and Floating Action, a band that has gotten tighter and tighter over the last two years and turned into a soul-grooving group that wouldn't have been out of its league in Muscle Shoals, Memphis, Philadelphia or Detroit in the 60s and 70s, bring us to a very calm place where they woo us with gorgeous melodies and scrappily fuzzed out tones that radiate a vinyl warmth that somehow immediately instills a feeling of nostalgic happiness.

The songs that are on the band's self-titled debut full-length are numbers that reflect the carefree, I'm-clocking-out-early-for-the-rest-of-the-day thought even if there's a love problem or an even more torturous non-love problem. Mostly, the songs that Kaufman writes come from a spot of reluctant comfort, where a man and a woman are in the middle of their love, a mutual feeling where they care, love and yearn for the other and they're desperately hoping that it doesn't wane, but who could ever be certain of anything so uncertain as love? Kaufman's characters worry about this constantly - that impermanence of those matters - and there's begging and pleading (all of it mostly internally in the privacy of one's own troubled confidence) that feels absolutely justified and actually quite endearing. It's what we all do in those same situations when the going is good, we pray that something or someone doesn't come along and muck it all up like usual. Kaufman sings about being held up to the sunlight, but he's most wise when we're allowed to drift with him and empathize with his spirit on "So Vapor," when he lets this line out soft and cool, "When your mind is at ease to let go, to let go, to let go/So vapor." It captures all of his greatest inspirations and fears in one short and resoundingly soothing touch.

Live At The Grey Eagle