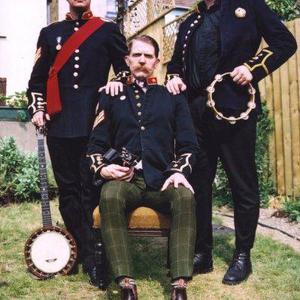 The Buff Medways formed around 2000 after the demise of Thee Headcoats and are Billy Childish (vocals, guitar), along with ex- Prisioner Graham Day (bass, vocals) (Replacing Johnny Barker who left on 21st October 2003) and Wolf Howard (drums). Wolf, who was in also in the original line-up of The James Taylor Quartet, managed a month of gigs while nursing a broken arm but it didn't stopped him bashing the shit out of his drum kit like Keith Moon.

The Buff Medways cut a dash with their Victorian army uniforms and their vintage Vox amps. The gear may be old but as one critic wrote the band are "the snarled lip embodiment of rock'n'roll spirit rather than nostalgia or shabby revivalism". Live and on record The Buff Medways are all about great songs and vibrant raw energy - no frills.

The Buff Medways played their first ever gig at the legendary Dirty Water Club on the 9th March 2001.