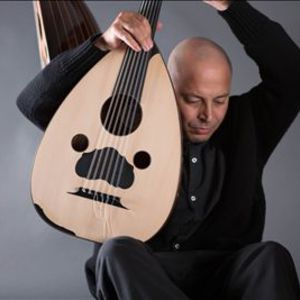 Singer, composer, and oud player Dhafer Youssef (???? ????), was born in 1967 in Teboulba, Tunisia. The oud is an Arabic lute, a string instrument that can achieve a beautiful sound from those who know how to master it. Youssef began singing when he was only five-years-old. Since then he has performed for audiences in Tunisia, Germany, France, Austria, Switzerland, and other countries. He has appeared with his own ensembles and recorded two albums with them, one in 1993 and the other three years later.

Youssef began singing when he was only five-years-old. Since then he has performed for audiences in Tunisia, Germany, France, Austria, Switzerland, and other countries. He has appeared with his own ensembles and recorded two albums with them, one in 1993 and the other three years later. Youssef's music combines Sufi tradition, world, mystical, and jazz influences with Arabic lyricism. In 1999, Enja Records released Youssef's third album, Malak, which includes the songs "A Kind of Love," "Tarannoum," and "Eklil." Youssef provided vocals and oud for the album and was accompanied by such well-known artists as violinist Zoltan Lantos, bassist Achim Tang, tabla and dolak player Jatinder Thakur, tambourine player Carlo Rizzo, bassist Renaud Garcia-Fons, and drummer Patrice H?ral. In 2002, Youssef released Electric Sufi on Enja and added electronic elements and funky grooves to his genre-bending sound with the ex-Sugar Hill Gang and Tackhead rhythm section of Will Calhoun and Doug Wimbush and followed it up with 'Digital Prophecy', another multi-layered, multi-faceted marvel. His most recent album, Abu Nwas Rhapsody (2010) paints, perhaps, the broadest picture of Youssef of any single album to date, with its focus on a consistent lineup and the resultant chemistry. Without dismissing the inestimable strengths of Youssef's playing, singing and composing, Abu Nawas Rhapsody's greatest energy and strength comes from an ideal trio of collaborators, who turn it into his hottest session to date.

He developed some perennial musical partnerships, notably with the Sardinian trumpeter Paolo Fresu and the Norwegian guitarist Eivind Aarset. Youssef feels a special bond with Scandinavian musicians, which is fortunate, since Norway and Sweden are now widely regarded to have the most fascinating and dynamic avant-garde jazz scenes in the world. Youssef has also performed with Uri Caine, Jon Hassell, Markus Stockhausen, Nguy?n L? and the cuban pianist Omar Sosa, to name but a few. In 2001 recorded the 'Electric Sufi' CD With walls, boundaries, barriers, labels and frontiers becoming ever more rigid and impregnable, Dhafer Youssef reminds us that any composer or musician of worth must be free to roam, with his body, his mind and his spirit, or music itself might end up being the biggest casualty.

Diwan Of Beauty And Odd