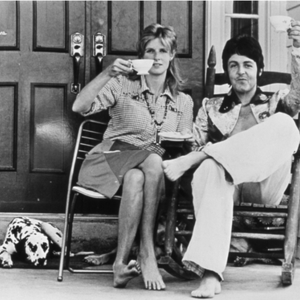 The moniker Paul & Linda McCartney was used just once for the album Ram in 1971. Set against the backdrop of the legal action taking place in Britain's High Court with the dissolution of The Beatles partnership, following their break-up the year before, Ram was the second of two albums McCartney released between quitting The Beatles and forming Wings, whose future drummer Denny Seiwell played on the record, alongside the McCartneys and session musicians.

Sir James Paul McCartney, MBE (born 18 June 1942 - Liverpool, England) is a British singer, musician and songwriter, who first came to prominence as a member of The Beatles. Linda McCartney established herself as a professional photographer in the rock and roll scene, and met her second husband, Paul McCartney, while photographing groups for a book titled Rock and Other Four Letter Words in 1967. They met at a night club called the Bag o' Nails in May of 1967 and married in 1969. After the breakup of the The Beatles in 1970, Paul began teaching Linda to play keyboards, and included her in the lineup for his new band, Wings. Although Linda was shunned by music critics for her amateur singing and playing skills, Wings garnered several Grammy Awards for their music, and became one of the most successful bands of the 1970s.